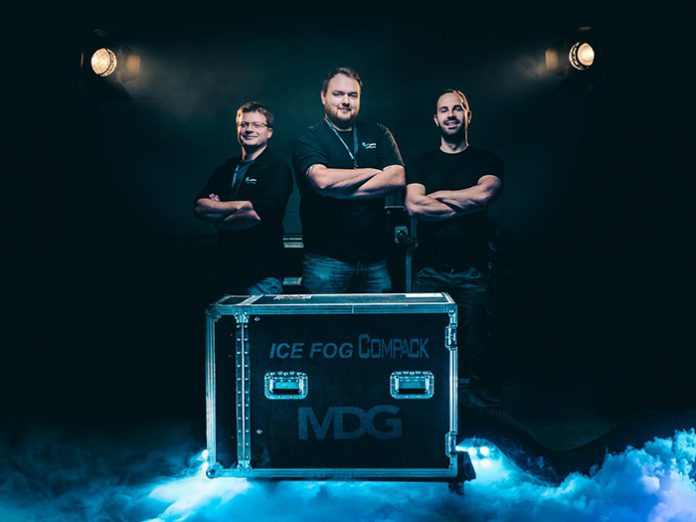 Blue Parrot provides full production services and dry hire of lighting, sound, video, staging, rigging and power distribution, which it has done for more than 18 years.

The Blue Parrot team was actively looking for alternative low fog and haze generators which would give a better output with less noise and the durability to withstand the high demands of life in a rental house.

“We made a conscious decision to invest in MDG because the demand for the brand in Scotland is growing fast,” said Blue Parrot MD, Jonnie Clough. “We already have low fog and haze generators from other manufacturers, but we’re not really satisfied with the effect they produced and found them very noisy.”

MDG UK’s Matt Wiseman took the MDG generators to Edinburgh to show the team and they were instantly convinced. “The ICE FOG Compack gives a much better effect than we have been able to achieve with our existing units,” said Clough.

“The low fog is beautiful and just stays on the ground. Any inevitable kick-up caused by performer movement simply raises and disappears quickly without causing any unwanted aerial residue.

“When considering a change, we had some initial doubts about the use of CO2, having heard it could be difficult to source and tour, but we were impressed with how easy it has been. We did some forward planning and simply set up with a supplier who is experienced and knows exactly what is required, and it has been plain sailing ever since.”

Clough’s main area of expertise, aside from running the company, lies in lighting design for a wide range of projects including theatre, musicals, gigs and live events. He says he chose the MDG ATMe and ICE FOG Compack HP because he wanted to use them on his own shows and because they would subsequently be a good choice for their hire department.

“We could see that all the major touring shows use MDG which is a great recommendation of their strength and tourability. And anyone trying them for the first time just falls in love with the effect, not to mention their economy on fluid use. We are finding them extremely popular: the ICE FOG was hired out solidly for the first month, while the ATMe has been used on ten or twelve shows since we bought it.”

Head of Productions, Mike Somerville, who has a wealth of technical expertise and has worked in many venues across Scotland agreed: “It is impossible for anyone to be disappointed with the effect from the ICE FOG Compack HP – it is the best I have ever seen. It does exactly what it says and is much quieter than other generators. For cost effectiveness and tourability, it is the best low fogger on the market.”

Blue Parrot’s new MDG investments are due to perform in the upcoming productions of West Side Story at the Alhambra Theatre, Dunfermline (3-6 October 2018) and Chitty Chitty Bang Bang at King’s Theatre, Glasgow (9-13 October 2018).