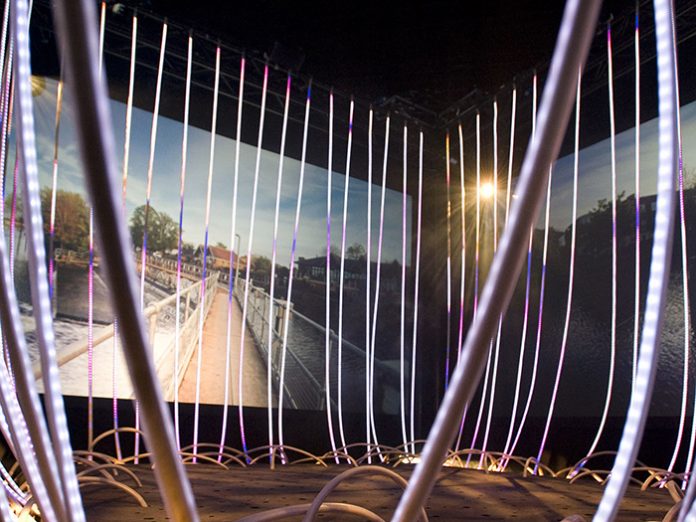 At the beginning of May, a two-year project came to be realised for inspirational Guildford School of Acting lighting tutor Michelle (Mig) Burgess when her unique design installation Blackout was revealed to the industry.

Blackout harnessed the collective powers of light, sound and video in the hope of affecting genuine changes in an approach to mental health.

Burgess is searingly open about living with Bipolar II disorder – a condition with which she was finally diagnosed in her late twenties. And for the past couple of years, she has been formulating a plan to create a design installation to portray, in a sensory way, the mental journey inside a Bipolar II patient’s head as they transition through a manic episode.

The result has been a highly provocative, moving installation, experienced alone for six minutes, and which, over the course of 4 days was seen by over 250 industry professionals, venue operators, young people and mental health experts.

“I’m a creative – it is far easier to express my feelings through art than through words. And literally, as the strapline of Blackout explains, ‘sometimes the lights go out in my head’.”

The installation is set in a quiet, closed black box, and each visitor is asked to step through LED strips and up onto a steel deck platform and into the truss structure to stand in the very centre of the piece. By looking beyond the LED strips it is possible to see four video screens placed around the structure.

The timecoded Blackout sequence starts off with the wall projections (life outside Burgess’ head) and LED lighting (Burgess’ brain) being harmonious and pleasant – all functioning like clockwork. As this dips into the bipolar spectrum – often triggered by an external event – the brain’s ‘normal’ activities start to shut down and disengage from the world around … as the mood irrevocably sinks.

At its lowest point, all the lights go out completely, with the world around – on the projection screens – continuing, oblivious. This is the dark and inhospitable place that Chester Bennington, lead vocalist of Linkin Park described as having absolutely “no sunshine”.

From this isolated, dark place, the next section of the installation evokes the process of how the brain starts to return to normal, a process which in real life can take several days or weeks.

When the recovery is complete, the lighting sequence and the bipolar cycle return to the devised start sequence as the person regains balance, structure, and some sort of control.

It’s meant to be hard-hitting, and it’s meant to be brave. And for some, perhaps a little uncomfortable to be in a black box, alone, with all your senses being challenged around you.

The creative team role call is certainly impressive and made up of a number of recognised industry professionals all of whom are long-term friends of Burgess’. “I had to bide my time to ensure that if I went ahead, I could deliver the project to a high enough standard to do the installation justice” explained Burgess.

“Whilst the birth of my daughter Chloe was a driving force – because I wanted her to see her mum being strong, open and honest about Bipolar II – I also needed to find a calendar slot where all my high profile (and much-in-demand) design team could come together in one place. Plus, I also needed the backing of some key companies for equipment support, as well as to secure the final injection of seed money to get the project off the ground.”

Finn Ross is a university friend “who just happens to be a fabulous and talented, award-winning video designer’, smiled Burgess.  “And the first person I broached Blackout to was theatre director Simon Anderson who I have previously worked with and known for many years.  I wanted his opinion and advice as a director as this wasn’t my field of expertise.

Together we had numerous challenging discussions about the design choices and the direction of the piece, but I knew he understood me and could support me alongside his skillset in theatre creation. And my husband, Paul Burgess of Sadlers Wells – well, it was imperative to have him with me on this journey, and apart from being my life partner, there is the bonus of him being a talented lighting designer and technician. Finally, Zoe Milton is an audio version of me – so she had to be on the team as our sound designer.”

Simon Anderson was intrigued from the start but quickly realised how important it was to get involved.  “I love theatre and see the arts as a force for change – in our increasingly distant society where we sit in front of a computer rather than talk, theatre is one of the last truly communal experiences.

Blackout is a totally unique way of engaging people’s emotions and affecting them in a non-conventional way. It was my job to translate what was in Mig’s head into something which would engage with a stranger. It was an incredible directorial challenge!”

And the challenges were significant for all the team – from both a technical design point of view as well as a personal point of view.

“I wanted to create something using technical theatre arts mediums to create, and explain my mental health condition and how it feels to experience hyper mania and manic lows” explained Mig.

“Initially my design was inspired by Kanye West’s Glastonbury performance where he had the old school rig of PAR cans above and around him with the lighting team running video content through it and using the PARs as a crude video wall. I felt the analogue look created by rows of lights in a box formation accurately depicted the activity in my brain, and were like neurons.”

Burgess continued: “However, as the concept evolved, we realised that LED would be a cleaner, and more efficient way to use light with the correct ratio to see through the product and have visual access to the screen content behind.  With the support of Light Initiative, the LED noodles added another dimension and proved to be the perfect product.”

By using technology alone, Blackout has been described by Burgess as a ‘theatrical show with no cast’, creating a challenge for theatre director Anderson. In this respect, Anderson and Burgess believe Blackout is technically ground-breaking where the director is directing the technology to tell the story.

“A cast is the director’s comfort zone” said Anderson. “You spend several weeks with them and then you apply the technical aspects of the show in production week, secure in the knowledge you have the cast on board.  With Blackout there is no such safety net and I needed to make sure we didn’t lose sight of the story we were telling through these technical elements. In a very real sense the lighting, the sound, the vibrations, the projections all became the cast.”

There has also been significant support from the industry. Whilst Robe have spearheaded this as key sponsor providing the seed money to make the concept a reality, as well as key lighting fixtures including the brand new T1 and Cycbar 15 linear LED strips, several other companies, have pulled together, providing rehearsal and pre-production spaces, a WYSISWYG suite for programming, and equipment to make Blackout happen.

Josef Valchar (CEO Robe) travelled from the Czech Republic specifically to support Burgess and attend the launch event, and his feelings reflect the overall mood of the companies who have supported Blackout.  “We have been delighted to work with Mig and her creative team to make her project a reality. It was fascinating to experience the final installation first-hand and all of us at Robe admire her bravery in addressing the challenges she faces with this condition in such an open and honest way. I hope very much that this valuable installation will go on to be seen by very many more people, and will provide invaluable insight, understanding, and discussion surrounding the issues of mental health – not just in our industry – but in a broader community as well.”

Burgess has been overwhelmed by the reaction to Blackout: “I am truly humbled at the enthusiasm and support I have had from everyone that has been a part of making Blackout happen. From the earliest days of the project, everyone has been supportive and one of the most rewarding aspects has been that companies and individuals have put their company hats to one side, and worked towards the common goal of making this happen, and by doing so, promoting mental health.  This level of industry collaboration is hopefully an example and an inspiration to my students.”

That collaboration was also evident in the way the production team worked. Anderson explained: “Normally in theatre you operate in your silo until production week. Here, everyone had a creative voice from the get-go – it was a truly collaborative process – so Blackout was not only breaking new ground in what we were addressing, but in the way we were working as well. That collaboration and camaraderie was immensely rewarding.”

“The reaction has been the most rewarding part of the process – seeing the responses of the people coming out of the installation was evidence enough for me, that after the intense journey of the production, it had all been worthwhile,” concluded Anderson.