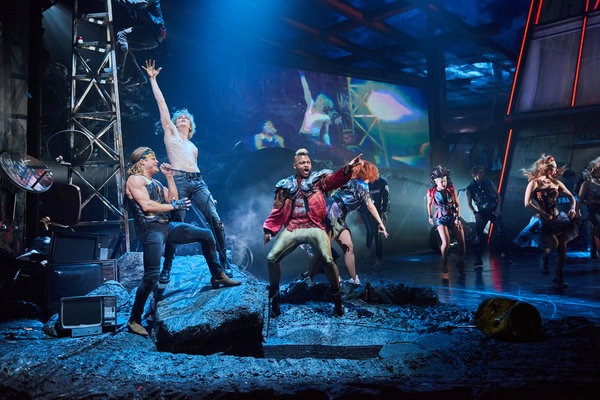 Bat Out of Hell-The Musical is set to return to the stage, this time in Toronto, with an indication that it will be back in London next year, thanks to innovative lighting and video production.

Associate Lighting Designer Rob Casey who worked alongside Patrick Woodroffe, explained: “The overarching theme of the lighting for Bat Out of Hell is to achieve big, operatic backlighting that compliments Jon Bausor’s rugged set. We took a basic set of ideas from Patrick and theatricalised it using numerous positions overhead and around the set. The trusses are trimmed to around 12m, well out of view and capable of giving a steep-angled backlight, which Patrick is a really big fan of.”

Lighting Programmer Chris Hirst added: “The main workhorse lights we’re using are the Martin by Harman Mac Viper Performance moving lights, as well as GLP X4 and X4L LED lights, which we use to achieve a lot of the looks seen on stage. Additionally, we have Martin Atomic and HES Dataflash strobes, a variety of different sized Colorblaze LED battens, Icon Beams, Colorblast CB6 LED lights, and a substantial package of generic lighting fixtures in the rig. All the lighting cues are pre-programmed on a grandMA2 console to timecode, which allows all the big, strobe looks, yet can still be cued through by a DSM.”

Jim Steinman’s soundtrack, made famous by Meat Loaf, involves one of the most ambitious set designs to ever grace the stage of a theatre by Jon Bausor, an innovative use of video by Finn Ross, and an up-scaled, operatic lighting design by Woodroffe, Bat Out of Hell-The Musical has made a big impact on the UK musical theatre scene, which it will attempt to emulate when the show transfers to Toronto in October.

Video Designer, Finn Ross, commented: “The video design for Bat Out of Hell summons the ruined world of Obsidian, the neo-futuristic city in which the show is set. The set is fully video-mapped and constantly textured by video to shift us from location to location, in an abstract style inspired by the ruined Bronx of the 1970s. We also use a lot of live camera to present certain aspects of the show as if happening in a dream. We process the camera through Notch to give the image a heightened, dream-like atmosphere. Everything is sequenced in d3, making it very easy for us to rework whole segments of the show in visualisation.”

Peter Marshall, Director of Theatre for PRG XL Video, oversaw the provision of kit to Bat Out of Hell, reflected: “The show initially opened for a twelve-week run in Manchester at the start of the year, before transferring to the coliseum for the summer season from June to August. It was brilliant to continue our relationship with Producer Michael Cohl and General Manager Julian Stoneman again after supporting them on Rock of Ages, and very exciting to work with Patrick and Finn, providing some of the latest technology on the market, including the Panasonic PT-RZ31K laser projectors. Bat Out of Hell was one of the first installs of these fabulous projectors in the world, which came straight from the Panasonic factory in Japan to the Opera House in Manchester.”

“It may sound like a cliché to say that it was delightful to be involved with the show, but everything about Bat Out of Hell has been brilliant and a real privilege to be part of it. The music, design, people and experience have been amazing. The out of the box creativity shown by all those involved have allowed us to showcase exactly what we can do combining lighting and video in the theatre. We wish everyone involved in Bat Out of Hell all the best for the remainder of their time in London, for the transfer to Toronto and beyond,” Marshall concluded.

Bat Out of Hell The Musical will play at Toronto’s Ed Mirvish Theatre from 14 October to 3 December 2017.