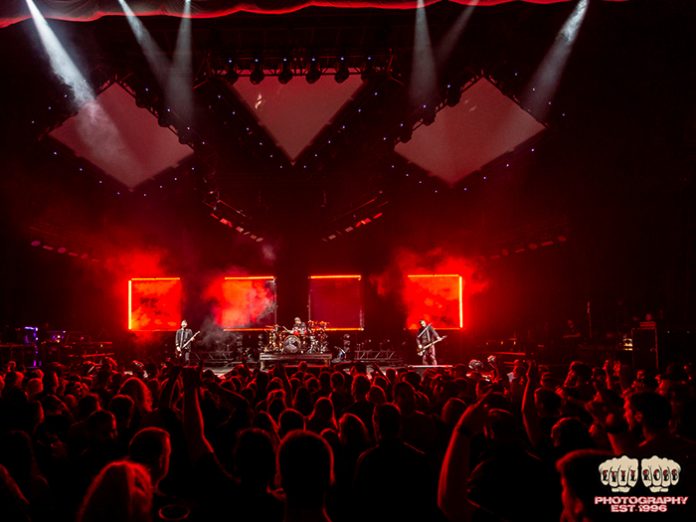 American alternative band Chevelle recently finished a summer tour with a lighting system provided by longtime partner, Bandit Lites. The band, made up of brothers Pete and Sam Loeffler and Dean Bernardini, were on the road as a direct support act before gearing up for a larger fall run.

Designer Robb Jibson engineered an efficient and effective design that could meet the rigorous demands of a summer tour sharing, “We wanted to use newer fixtures with LED sources that near the 1000w mark for the hard edge sources and had a certain feature set. Bandit did the best thing that any supplier could possibly do- they bought us brand new toys to play with! Jake Tickle and company worked with me to hunt through all the current offerings of fixtures in this class and zero in on what offered the best features and output while being something that they would like to own, support and supply to others!”

Bandit Lites supplied GLP impression X4 Bar 20s and Ayrton Khamsin-S fixtures. Bandit also provided a grandMA2 lite console for control. “We have on the books a more cohesive design for a forthcoming album cycle for the artist, but this tour was an opportunity to go and play ten weeks’ worth of shows and have a fun summer vacation,” said Jibson. “Not wanting to expose the new look before the new cycle but wanting to do something different than we had done previously, we decided to take a few items from the new concept and deploy in the summer of 19’.”

“The Khamsins were the first LED powerhouse fixture I’ve been able to tour with,” said Bandit Lites Ty Veneziano. “They are super powerful and very road worthy. I had zero mechanical or electrical issues with them for the seventy-five days in a row I was out. The beam can be razor sharp and the color saturation is rich and consistent.”

The resilient X4 Bar 20s were bolted to a set piece that road in the truck from gig to gig, never seeing their road case for the whole tour but still providing outstanding performance.

“The X4 Bar 20’s stole the show,” said Veneziano. “They created the look. The LED strips created symmetrical sheets of light that were projected all around the stage. The output of the light do great for LED chases and strobe effects.”

Both the GLP XBar 20 and Ayrton Khamsin-S fixtures were programmed to make the set appear much larger when the house lights went out. “We were the only band using haze on the summer tour,” explained Veneziano. “I took advantage and went one hundred percent on our hazers every night, and the result highlighted our intent.”

“Chevelle has been a very treasured member of the Bandit Family for many years and continues to be,” said Bandit Lites Business Development Officer Brent Barrett. “It is a pleasure to work with Chris Morrison (Tour Manager) who is not just a business associate, but also a friend that I look forward to dealing with on the financial end of the touring. This year we had the opportunity to work with Robb Jibson with which we hadn’t worked with previously, and he brought a new and distinctive look to Chevelle, and we are very appreciative that we got to work with and get to know him better on this project!”

“Designing tours that you are not traveling with takes a lot of faith,” explained Jibson, “faith in your touring staff, faith in your production partner and kind of a leap of faith to just see how it all works out. It is equal parts rewarding, terrifying and a bit unknown. Working with Bandit takes the unknown part away because you know that they are partners with you on the project! They are actually interested in the show and the success and will do whatever it takes to see it through. I’ll still be over here feeling terrified and rewarded. They also supplied us a really talented, hardworking and kind guy in Ty Veneziano. With stage visual elements being more and more of a commodity that is assessable to anyone, the only real thing you can offer is people and the service. Bandit excels at this!”

“I am always comfortable on the road knowing Matt King has my back at home base,” furthered Veneziano. “Every time I have a request, he has a fast answer or a solution to my issue.”