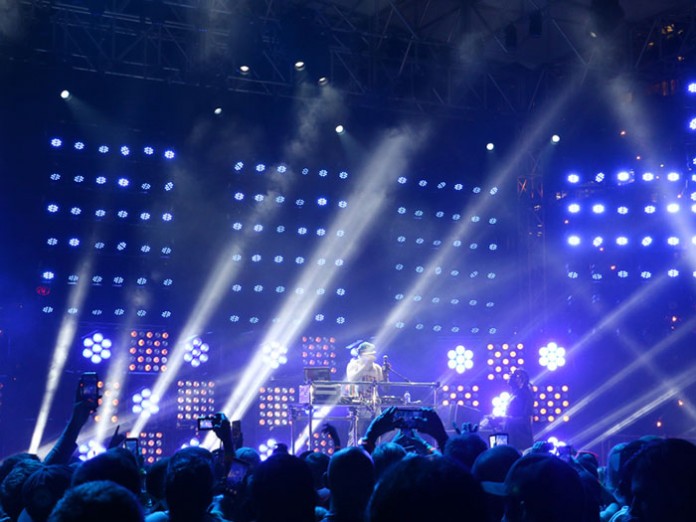 The South by Southwest Music Festival may have been the last of the trifecta that makes up SXSW 2016, but it was just as spectacular as the Film and Interactive portions of the nine day event. Lighting designer Victor Fable entrusted Bandit Lites to provide the lighting package for the McGarrah Jessee Rooftop stage, which featured performances from Phebe Starr, Armstrong Leigh, 2 Chainz, Aubrie Sellers, Flo Rida, LANco and Cypress Hill. Keith Hoagland programmed the lighting and was the board op.

Taking into account the lighting production needed to function both for performances in the daytime and evening, Fable created a dynamic structural look that applied high-performance fixtures with eye catching configurations. “The stage was two tiered, split horizontally about a quarter way down from upstage,” explained crew chief Ty Veneziano. “The second tier upstage was higher by about two feet.”Four floor pods made up of nine celled squares containing i-Pix BB7s and Bandit 5x5s were placed on the second tier, while alternating Bandit 5x5s and Clay Paky Sharpys lined the upstage first tier and GLP X4S’s lined the downstage, giving it a multi-dimensional look from all angles.

GRNLite Par Bars and GRNLite 8 Lites were placed above the floor pods and sides of the stage, while Sharpys were positioned along the first tier’s stage left and stage right. GLP X4S’s and VL 3500s were scattered throughout the roof of the stage, while 4 Lycian M2 Spot Lights illuminated the artists.

For Saturday night’s performance, the stage transformed as the four floor pods were removed and replaced with Ayrton Magic Rings. Additionally, five square pods each containing 36 Ayrton Magic Dots were flown in place of the GRNLite Par Bars. The very fact the stage was on the roof of a six level parking garage presented both the normal, exposed-to-the-elements challenge (where Bandit’s proficiency with festivals played a key role in combating), it also meant the crew needed to transport two trucks worth of gear to the roof.

Using three fork lift operators, a golf cart with a tailor and thoughtful configuring (including how to get the too-tall pods to the roof), Bandit’s team of Crew Chief Ty Veneziano, Ryan Waldron, Andrew Heid and Chas Albea executed both load-in and load-out.