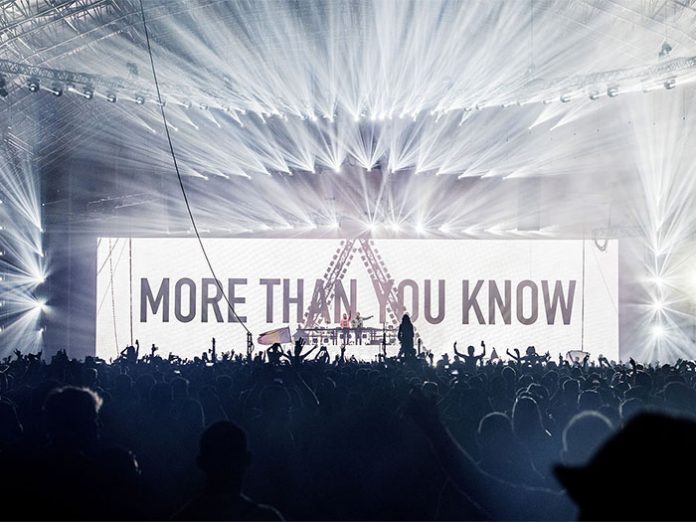 HSL supplied a large floor-and-roof lighting package consisting of over 180 fixtures which was specified by Show Designer Andy Hurst for Swedish DJ duo Axwell^Ingrosso’s set in the Steel Yard.

The large industrial strength temporary venue structure has been making a few appearances around the UK and was erected in Victoria Park, Hackney, for a two day dance music extravaganza, Steel Yard London, presented by Creamfields over the late May bank holiday weekend.

In addition to overseeing the show’s general visuallity, Hurst worked closely on a Lighting Design with Dan Robinson who programmed and operated lights for the show, while Hurst ran over 100 lasers which were supplied by ER.

By far the most galvanising aspect of this gig was the complete overnight changeover required as they played the day after another Swedish superstar DJ, Eric Prydz, performed on the Friday night. Both artists have dramatically different lighting and visual designs and rigs, so it wasn’t possible to share any major common components. The only solution was a complete de-rig and re-rig!

“We could use some of the lighting fixtures that were in the venue for the previous night,” explained Hurst (these were supplied by the event’s general lighting contractors, PRG), “But absolutely everything had to be in a different place. Prydz has a highly stylised show and so did we.”

Axwell^Ingrosso’s set entailed a complete new roof lighting system installed and this was a build from the ground up, with all the pressures involved!

All the A^I video content is very filmic and relevant to the narrative of the performance, so it was essential to the look and feel of the show to have clear site lines to an epic 28 metre wide LED screen upstage.

Eighteen sections of HSL’s pre-rigged truss were used to construct six chevron trusses that were flown over the stage and the design ensured that as many fixtures as possible could be travelled in these sections for speed and efficiency. When they arrived, they were simply rolled-in-and-rigged, a concept that saved serious time.

The two audience trusses for the previous night’s show were taken down from their points running parallel to the sides of the Steel Yard and reconfigured as a giant V, presenting an inverted version of the Axwell^Ingrosso logo with the apex stage centre.

Onstage, an A frame truss behind the DJ booth was populated with 112 x 3.5 Watt Kinekt lasers – 54 per side – mimicking the A^I logo, with a 30 Watt standard laser rigged in the apex of the audience trusses that could fill the space in between with a laser ceiling above the crowds.

HSL’s two crew on site were Neil Smith and Andy Summerfield, and the gig was project managed by Jordan Hanson in the company’s Blackburn HQ. “They were a fantastic team and a pleasure to work with,” stated Hurst. “The challenge was the changeover time, and although we are renowned for achieving incredible engineering feats in crazy schedules in this industry … this was a really ambitious one!” reiterated Hurst.

They had to be ready for 12 noon doors on the Sunday, which was a gruelling stint for the riggers who had to reposition a lot of points to get everything in the right place.

It was also the second high profile one-off for Hurst over the weekend. The previous night he designed and ran a stunning show for Sigma who became the first d‘n’b act to play London’s Royal Albert Hall.