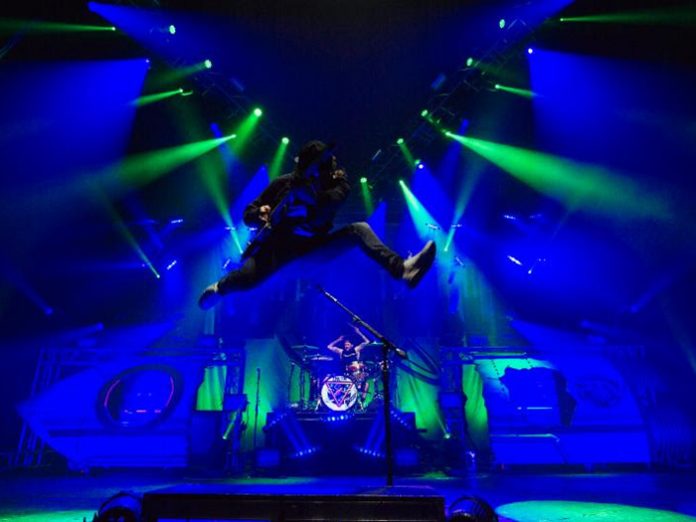 “I use the Sapphire Touch because it’s user friendly and it’s easy to edit all aspects of the show live if necessary,” commented Maker. “The console has a bright, sharp and precise touch screen and with the array of effects, from pixel mapping to key frame shapes, it helps me to create dynamic show files in half the time of other consoles.”

Maker’s tour design was based around two crashed rocket ship set pieces, using stark lighting to create a launch pad/space station vibe. After the show’s intro – an animation projected onto a white kabuki drop, which saw the band flying through galaxies and battling different aspects of the album artwork – the four-piece emerged in space suits and kicked off the show.

“I wanted to create a high-tech, spaceship look around the stage so turned to Elation Professional ACL 360 fixtures, rigging them on four separate upstage ladders.” Maker explained.

“I started using the Key Frame Shape feature on this particular tour and it’s been an exceptional help in programming multi-layered, complex looks for specific songs,” Maker added.

Key Frame Shapes allows designers to create incredible effects from scratch. Using palettes to define the frames and powerful tools such as transition curves and spatial direction, it is possible to create entirely different looks for various channels instantly.