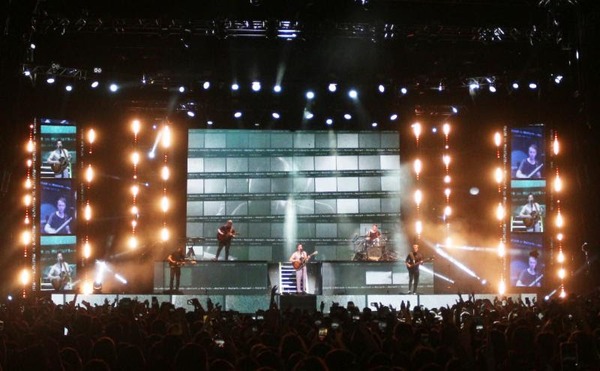 O’Neill controlled his lighting rig with an Avolites Arena console, and the video content run through Avolites Ai media server operated by Tim Hornung, the band’s European tour is showcasing the cutting edge of light and video control.

Responsible for both set and lighting design, O’Neill created a raised performance area backed, flanked and fronted in LED screen. The production’s wraparound surfaces featured a mixture of rich video content developed through a close collaboration between the band, Cunniffe and Tom Readdy of Yes Please Productions.

“Looking at the stage head-on or from an angle the placement of the LED screens makes the band appear that they are emerging from the onstage video content,” said O’Neill. “If you see the guys performing downstage they look as though they are standing on and performing out of the images, as opposed to just performing in front of them.”

From there, O’Neill created a lighting design which would provide texture, depth and movement to the onstage video content. “Picture This had strong ideas on the looks they wanted for the video content,” explained O’Neill. “We contacted Mark to come over for the first arena show, the SSE Arena in Belfast, to work with the band to create additional content for the live Notch effects on the screens. Mark and his team were brilliant. With the help of the band, Tim on the Ai and the Notch system, the show really came together.”

Duo Ai R4 Servers, 1 operating as main, the other as backup, were used to provide the pre-recorded and live video control for the SSE Arena show. Both servers were running with Ai v10.1 which was optimised for Notch integration.

“I really like Notch as an addition in Ai,” added Hornung who operated the system for the Belfast show, “It gives more flexibility when creating looks for the show. For Picture This we had some looks with lots of small live camera pictures on the LED screen. Usually to create effects like that, it’s necessary to have a lot of layers in the media server. Using Notch to rearrange and duplicate the live camera feeds to the right positions and sizes meant we saved a lot of the performance in Ai using fewer layers.”

As well as Notch, Hornung is a fan of the Avolites Ai node-based engine, “The fact the system is based on nodes means that if there’s trouble on a production, you can still change the nodes to achieve the desired effect or feature,” he says. “This gives a lot of flexibility on productions.”

“When I knew I had the Avolites system in place on this tour, I knew I didn’t have to think about that side any more. Working with Tim was fantastic – as was everybody. LX crew chief, John McGuiness of JustLite who supplied the tour with its lighting, was great. The Picture This guys and Mark’s team were also brilliant and the whole show came together perfectly,” O’Neill concluded.

Picture This performed at Belfast’s SSE Arena on 27 October 2017. The band’s European tour continues with dates in the Netherlands, Germany; ending on 11 February 2018 in Sweden at Bar Brooklyn, Stockholm.