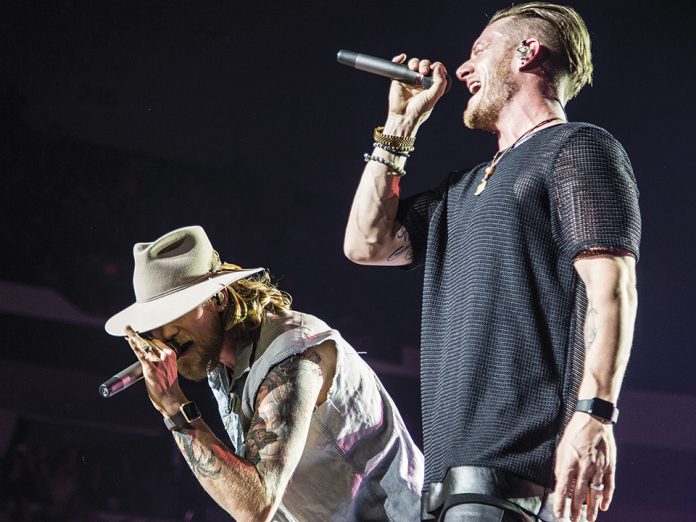 One of the hottest tours of recent note has been Florida Georgia Line’s “Dig Your Roots” tour, in which the country duo of Tyler Hubbard and Brian Kelley performed in 57 cities across the U.S. and Canada to over 800,000 fans. The tour was extended into 2017 with additional dates in North America, and it has also included opening performances by Dustin Lynch and Chris Lane. One thing in common between all three acts was their choice of front-line vocal microphones: The Artist Elite 5000 Series UHF Wireless System with the AEW-T6100a Hypercardioid Dynamic Handheld Transmitter from Audio-Technica, a leading innovator in transducer technology for over 50 years.

“We are using A-T’s 5000 series, and the 6100 capsule on both Tyler and BK,” stated Jared Blumenberg, (FOH) for Florida Georgia Line. “I have enjoyed using the A-T system with 6100 capsules for our guys. They cut through in the mix very nicely without sounding harsh or too low-end heavy. They have helped me get the vocals out in front of the mix much easier.”

Erik Rogers, Dustin Lynch’s FOH Engineer and Production Manager, echoes Jared’s commented: “We have tried every microphone from every manufacturer available on Dustin’s voice. The A-T microphone is, by far, the most accurate, natural sounding. It has warmth and definition with little or no EQ.” He continued, “In addition to the 6100, we also carried the 4100 capsule [AEW-T4100a cardioid dynamic microphone capsule] for the 5000-series wireless. The capsule was chosen daily depending on the venue, proximity to the PA, and proximity to the backline. We also carried A-T’s T1000a instrument packs [AEW-T1000a UHF UniPak Transmitter] for Dustin’s guitars.”

After extensive evaluation of other systems available on the market, Zach Pierce, Production Manager and FOH for Chris Lane, came to the same conclusion as Blumenberg and Rogers: “After a substantial ‘shootout’ with other combinations of brands/capsules, we chose the A-T 5000 wireless unit with the T6100 microphone capsule because it reproduced an incredibly accurate vocal right out of the gate. Our tour has an extensive thrust setup that puts the artist directly in front of the PA from multiple angles, and the T6100 gave us the clearest image with limited to no feedback. As for the A-T 5000, we haven’t had one dip in RF strength to date! It’s been a work horse for us and we rely on its consistency day in and day out.”