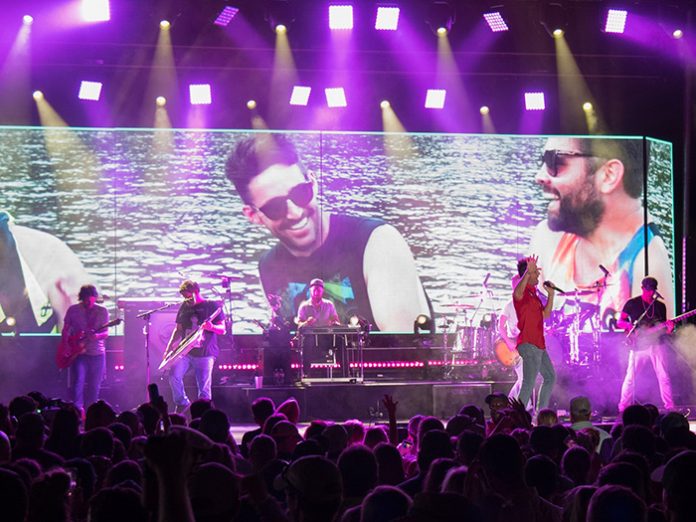 Nashville-based production company 44 Designs (44designs.com) was an early adopter of Elation’s Artiste DaVinci and recently used the award-winning LED moving head spot in its production design for country music artist Jake Owen’s Life’s Whatcha Make It tour. Twelve of the full-featured DaVinci fixtures were put to creative use by Lighting Designer and Production Manager Chris Nathan on a successful six-month long tour that’s been on the road since last spring.

Owen played sheds and baseball stadiums around the country over the summer with a recent fall leg moving into arenas. Nathan found the Artiste DaVinci a quality spot luminaire for both the outdoor and indoor venues.

“For the first leg we used the DaVinci as overhead profiles for key light and aerials while on the fall leg they lived on side trusses and focused on the runway and thrust as well as aerials,” explained Nathan of a versatile design that also incorporated Elation’s long-established touring beam fixture the Platinum Beam 5R Extreme. “The DaVinci is a versatile fixture and I love their brightness and sharpness. They have a very crisp and present look with a big solid beam that looked especially great in an arena setting.”

With the CMY colour mixing DaVinci, Nathan had at his disposal a range of graphical effects from dual gobo wheels plus 360° animation wheel and two rotating prisms. 44 Designs’ Chief Operations Officer, Clayton Thornton, emphasised the fixture’s compact design for such a full featured luminaire, stating: “It’s also worth mentioning that these fixtures were lightweight and served the purpose Chris had in mind while not overloading the SL-320 roof structure.”

Owen exuded a contagiously upbeat vibe on stage while playing a mix of modern country to more traditional numbers, a style he has honed over his 12-year career. 44 Designs has worked closely with the artist and his production team for the past two years and has forged a solid creative relationship.

“His crew and team all get his vision for how he wants his shows to look and feel, and we’ve just really enjoyed working with him on this tour. He’s a great person to collaborate with,” said 44 Designs Owner Jeff Lavallee, who served as creative director and production designer on the tour.

44 Designs supplied both lighting and video elements, including a large LED video wall backdrop whose content the DaVinci units accompanied with complementary colour and visual effect. “We chose the DaVinci’s because of their compact size and amazing brightness,” said Lavallee. “They pack a real punch when used with other lights and didn’t get lost next to the video wall.”

44 Designs has stocked the Artiste DaVinci since 2017 as one of the first production houses to do so and according to Lavallee has kept them busy on tours for Arlo Guthrie, Mutemath, Good Charlotte, Jake Owen and others. “They’ve been solid. They are an integral part of our inventory and our design looks and we’ve never had any issues with them on any tour,” he concluded.