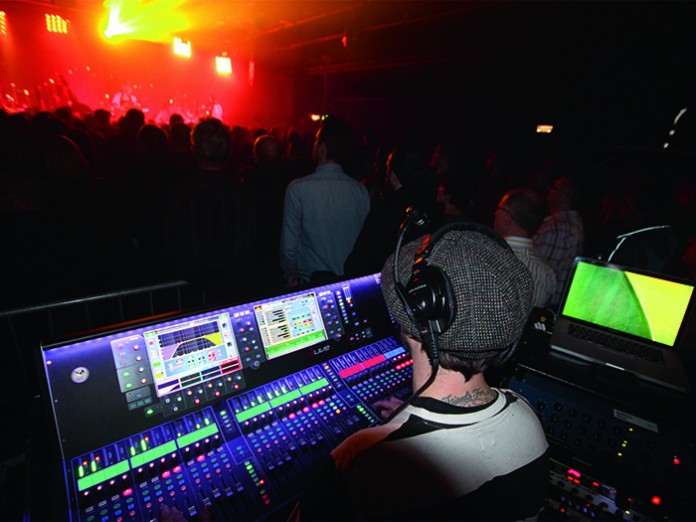 Having been a key point of contact during the development of Allen & Heath’s new digital mixing desk, FOH engineer Oscar Söderlund was the ideal candidate to shed some light on how the dLive has fared on its first UK tour. TPi’s Ste Durham headed down to Ane Brun’s Manchester date to speak with the man himself.

Three days before Norwegian songstress Ane Brun was due on stage in Manchester, her FOH and Monitor Engineer Oscar Söderlund was lying in a hospital bed, quite understandably feeling the effects of a disagreement between his enduro bike and a tree. Nevertheless, true to the adage made famous by Freddie Mercury and co, he and his new Allen & Heath desk were both present and correct at the city’s Gorilla venue to ensure that the show did, in fact, go on.

Söderlund has been an integral part of Brun’s live production since he joined the ranks in 2007, stepping in to oversee audio responsibilities for the singer / songwriter’s Changing of the Seasons tour. This was the beginning of what he called a “complimentary dynamic”, in which both performer and engineer have consistently endeavoured to improve the quality of their live offering.

He explained: “Her records have become more challenging over the years, taking it up a notch every time, and we always want to do the same from a production standpoint. I try to take it as far as possible live and get it as close to the records, making sure I deliver them in an interesting way. Ane knows what she wants but also trusts me to do a good job.

“It is very challenging to put Ane’s later albums into live sound. It’s a constant journey and one that teaches you new tricks all the time.”

Söderlund has been on the road since 1990, starting off directly from school. He said: “I was tired of school so I went to the local sound company. I was really into music and knew I wanted to work in the industry in some way, and engineering was the best choice. I gradually stepped up the shows and gigs, always trying to move forward and raise the bar. Working with the artists I choose gives me freedom to grow and they trust me to deliver their vision live. It’s a very privileged way of working.”

Söderlund has had his own freelance company, Parashoot, since 1999 and, during this time, has accumulated a wide range of stock – consoles in particular. “I try to focus on creating a nice mixing environment and this includes consoles, outboards, microphones, and speakers. To create a perfect signal chain from start to finish is my ultimate goal, but this is a constant journey as I am such a gearhead!”

After hearing the capabilities of Allen & Heath’s iLive T-series for the first time on a PJ Harvey tour in 2009, Söderlund instantly bought an iLive-T112 and has continued buying more Allen & Heath consoles ever since.

This loyalty, along with his willingness to suggest improvements to the iLive desk, led to Allen & Heath consulting him during the development of its new offering – the dLive. Over the last two years, Söderlund has made trips to the company’s factory in Penryn, Cornwall and lent his insight throughout the dLive’s beta testing phase.

He commented: “I initially had suggestions for the iLive that were held back due to lack of computing power. We had to wait until the iLive Mk II came around, which ended up becoming the dLive, but we continued the process of working together. I saw the first mock ups of the dLive two years ago, and two Christmases I have been to Penryn. The first year it was a cardboard box, then the next year it was a factory build. I feel really close to this console because I have been part of the process.

“When I got the beta console I couldn’t have hoped for it to be this good. They’ve done remarkable work with the preamps, which are, I think, the best sounding preamps in the digital live world. They are super flat, natural, and have a good dynamic range. This is strengthened by really good effects and EQ, just like the iLive. It’s been a joy to use the dLive ever since the official release,” Söderlund added.

“I knew that the team at Allen & Heath were developing a nice preamp, but they really knocked it out of the park with the end product.”

With a mixture of instruments such as upright bass, violin, vibraphonette, acoustic and electric guitars and keyboards, combined with large reverbs, delays and sometimes even distortion on the drums, the system (along with Söderlund himself) has a lot to deal with!

The key success in this challenge is rooted in Söderlund’s strong work ethic, and complemented by his familiarity with, and fondness for, his Allen & Heath desk.

He said: “I have found myself working the hpf on Ane’s vocal in a span of 185-233hz, depending on the song. It is so precise in its handling of the source you put through it. The same goes for the EQ, in that even the smallest changes can make a huge difference. When using the dLive it really feels like I’m using a surgical tool!”

That said, Söderlund was still keen to point out that the dLive is designed to deliver this precision whether the surgeon in question is dealing in acoustic guitars and violins or leather jackets and distortion pedals!

He concluded: “No matter what you are trying to create, the dLive gives you the tools to do it. The desk really does nurture creativity and that means it is a lot of fun when mixing live!”