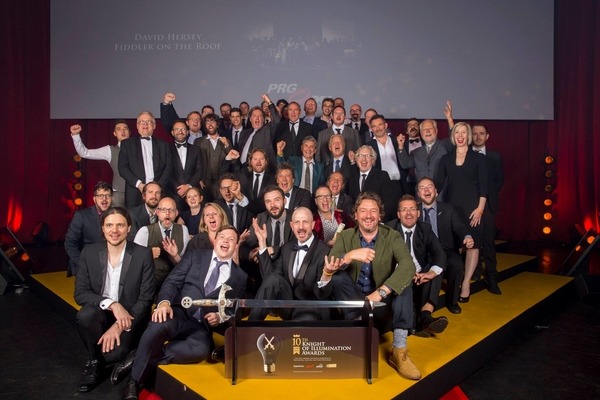 Association of Lighting Designers earned at place in the Knights of Illumination 2017 Awards, shortlisted for the company’s contribution to theatre, television, concert and touring events.

The event held at London’s Eventim Apollo marked the KOI Awards’ 10th anniversary. ALD’s Richard Howell won the ADB Theatre Award for Plays for his Guards at the Taj design at the Bush Theatre. Judge, Matt Trueman, claimed: “Richard conjured the majesty of looking at the Taj Mahal through light alone.”

In the same section, David Hersey, former chairman of the ALD scooped the PRG XL Video Theatre Award for Musicals with his Fiddler on the Roof design in Chichester, while the Robert Juliat Theatre Award for Opera was awarded to Simon Corder for his lighting of Opera Holland Park’s The Queen of Spades.

In the television category, Berne Davis received a sword for his work on the BBC1’s Festival of Remembrance, praised for creating a ‘reflective and powerful atmosphere’. Winning the STLD Award, STLD and ALD member, Ross Williams, has given of his programming excellence and support on many projects.

Fisher was recognised for his acclaimed and award-winning composition in lighting design around the world, including his work with the ALD, co-founding industry charity Light Relief and the new Technical Entertainment Charity BackUp, which provides financial support to industry technical professionals working in live events, theatre, TV and film.

ALD Executive Director, Ian Saunders, said: “It was a personal highlight to see a man who has mobilised so much for so many through the ALD, as well as the industry charities, recognised for his own excellent design work and his commitment to supporting the lighting community.

“The ALD is also proud to see so many of its members working across all of the KOI award genres nominated at the highest level for their creativity and commitment. These awards enhance the profile, and raise awareness of the fantastic work our members undertake within the field of live performance. Huge congratulations to Rick Fisher for his Lifetime Recognition Award, and to all the other ALD winners,” Saunders concluded.