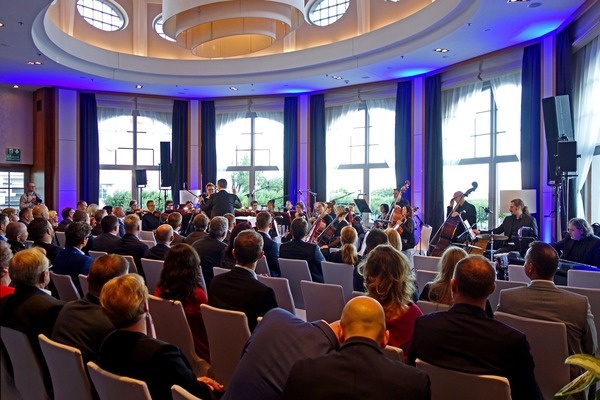 Alcons Audio has recently added a new territory to its global spread of users, with Polish event production company, Offstage utilising the QR, QM and VR series pro-ribbon systems on a wide range of events.

Based in Łęgowo, near Gdansk, Offstage provides concert sound, lighting and staging services for both national and international clients. In September 2017, its Alcons Audio pro-ribbon loudspeakers were used on a corporate event at the Sheraton Hotel in Sopot.

For the orchestral concert, Offstage used L-R arrays of an Alcons Audio QR24 modular line-source array column and QM24 LMF array extension, plus Alcons Audio VR8 compact versatile monitors as frontfills, powered by a Sentinel3 amplified loudspeaker controller. For the party, which took place in a different part of the ballroom, 2 Alcons Audio VR8s and a Sentinel10 were used.

Offstage owner Przemysław Waszkiewicz commented: “Every time we work with an orchestra we want to get as natural a sound as possible. The QR24 was a perfect solution because the sound is so precisely directional. We could project it above the musicians’ heads and microphones, completely avoiding any feedback. The audience was very pleased with the quality of the sound. For the party, the VR8s made the band sound really nice and clear, without making ears of people on the dance floor tired, as many other systems tend to.

“It was the same orchestra in the hotel’s larger Christopher Columbus Hall. This time there was no need to put the system behind the musicians, but the dual QR24 and QM24 arrays perfectly covered the bigger audience with very high quality sound, despite the reverberant echo of the hall,” Waszkiewicz continued.

“As our Front of House engineer Patryk Kozak says, one gets addicted to the Alcons sound, because there is so little distortion and the high frequencies are so smooth. Things are never the same after listening to an Alcons pro-ribbon system!” he concluded.