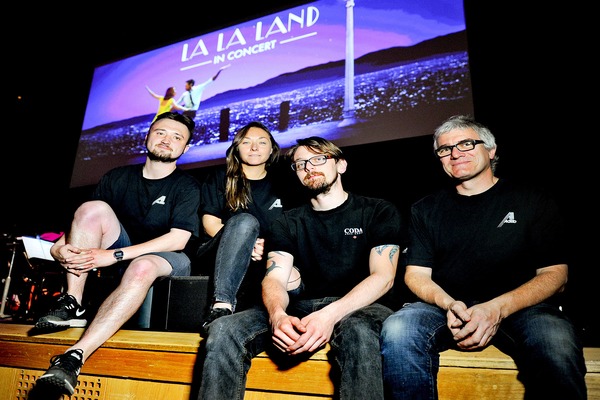 The 2 main PA hangs comprised 12 KARA, with 4 ARCS II a-side for infills and outfills, plus 4 KARA for stage lip fills and 2 KS28 subs per side. The DiGiCo SD10 FOH console allowed extra dialogue to the front half of the audience to counter the acoustic sound of the orchestra, with a system powered by L-Acoustics LA12X amplifiers, complete with a standard Adlib Lake processing, EQ and system management.

All the other monitoring was achieved using hard-wired IEMs and Adlib’s custom headphone split system, which allowed the provision of independent level-controlled mix to each member of the orchestra, apart from the percussion, pianists and jazz trio who had their own IEM mixes. DPA 4099s, DPA 4011s and Neumann KM184s microphones were used during the tour.

Adlib Account Manager Phil Kielty concluded: “As a lot of us are movie geeks, it was a real thrill for us to work with Harvey, Kitty and all at Senbla again, who are as passionate about their productions as we are! Presenting this type of entertainment is now becoming a well-oiled process for us and we are extremely excited to be involved at the heart of a new & ground-breaking live entertainment concept”.