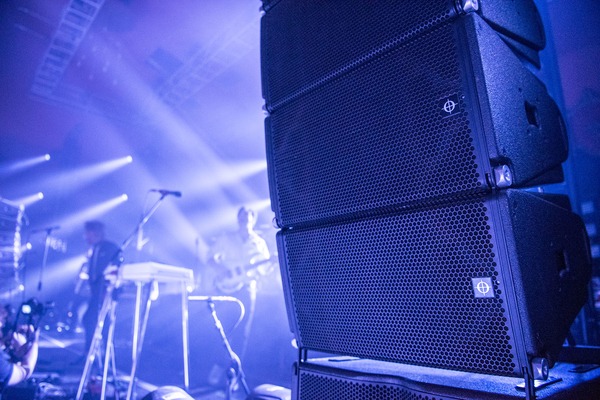 Enter Shikari, known for their animated, genre-defying collage of hardcore industrial punk and heavy metal electro-beats were supported during their latest outing with an Adlib supplied quadrophonic system.

During the initial stages of the tour’s design, Andy Russell (FOH) wanted to specify a system that would push boundaries in audio fidelity. He wanted to connect the massive energy emanating from the stage to Shikari’s hugely devoted fan-base. So, hand-on-heart, Adlib systems engineers George Puttock and Sam Proctor together with Adlib account manager and director Dave Jones all recommended Coda AiRAY as the perfect option.

Russell worked with Enter Shikari for the last 11 years and knows exactly how they and he like it to sound, with a system comprised of a 12-deep AiRAY hang per side with 4 ViRAY as downfill. Flown behind the AiRAY were 6 SC2 LF extensions per side. Including double 15” enclosures overlap the double 12”s of the AiRAY in the 40 – 160 Hz range, adding immense punch and weight to the already meaty AiRAY cabinet.

On the floor, 20 of Coda Audio’s Sensor Controlled SCP-F dual 18” Subs were placed in a horizontal line. Three of Coda’s new arrayable point source (APS) speakers were used per side for infill in conjunction with four high-output point source (HOPS) cabinets.

The rear speaker hangs providing the quad coverage comprised of 8 ViRAY speakers in each corner. A truss was flown between these hangs to run the cables to FOH. Audio was transported from the Midas PRO X at FOH to the Coda Amplifiers digitally and completely latency free with a Coda’s proprietary LiNET Redundant Signal Distribution System.

“The entire Coda package provided for this tour was a complete dream to use,” commented Puttock. “Audio quality was the prime concern for the Enter Shikari tour and the Coda System far outperformed all expectations. The added bonus that these speakers are also incredibly lightweight, easy to rig and efficient on amplifier resources was a massive plus… but completely incidental to the actual decision of quality first.

Monitor Engineer Joe Crouch worked with Adlib technician Kleiner on stage using one of Adlib’s Soundcraft Vi3000 consoles and the band’s own IEM system. With most inputs DI’d into the line system, it was a clean and quiet stage on which Andy and Joe could let loose their creativity.

Production Manager Edd Slaney added: “The AiRAY really is the perfect system. It not only sounds absolutely phenomenal, it’s also lightweight, which takes away any rigging concerns, and the boxes are so small we can fit a surround sound rig into the same trucks space a traditional stereo arena rig would take up. And again, it’s staggering just how much better the AiRAY sounds compared to other top end PA systems. It’s not often you have a PA system that is so far superior to what’s come before, that it looks like it will be a game-changer for the entire industry.”

Jones concluded: “To get amazing newspaper reviews about the sound quality is a rarity and proves that the CODA Audio system delivers on every level now. When Edd the PM came up to me during the sound check in an empty room on the first show commenting on how good it sounds you know something great is going to happen come show time. The band’s energy on stage is something else and it is one of the best live shows we’ve been involved with this year.”