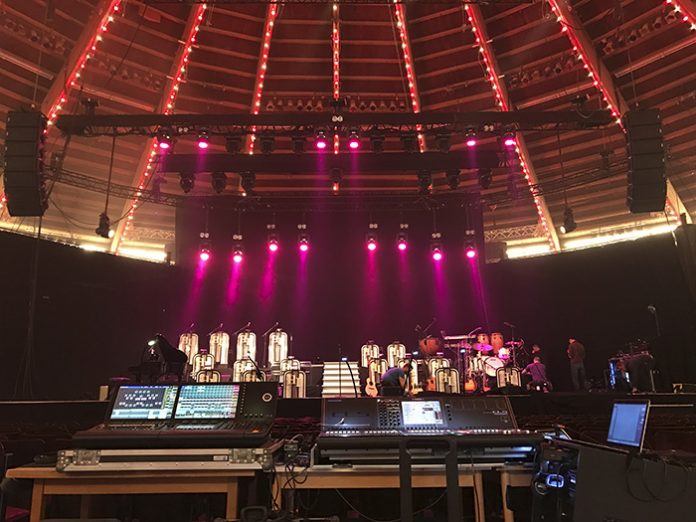 With fewer artists taking to the road for long multinational tours, the 1997/8 Comeback Tour by Belgian tenor Helmut Lotti stands out on the continental live music scene. Revolution Event Support has invested in NEXO’s GEO S12 and GEO M6 line arrays, as preferred by Lotti’s FOH Engineer Bart Faut, who is on the Revolution team.

Rental company Revolution Event Support has been working for Helmut Lotti for more than 20 years. Bart Faut has moved through many roles with the performer, starting as head of stage, then becoming tour manager, production manager, lighting supplier, and in 2016, the FOH engineer. In that same year, Revolution supplied its first NEXO system to Helmut Lotti’s live concerts.

“The GEO S12 is exactly the right system for this tour,” said Faut. “The combination of a 12-inch speaker in a cabinet that isn’t too big or heavy gives me the right amount of power.”

For Lotti, playing in venues with 1500-2500 capacity, the NEXO system is configured with 18 GEO S12 line array cabinets for the main PA, alongside 16 GEO M620 compact array modules for frontfills, infills and outfills as required. Additional M620s are used as monitors for the violinists.

Bart Faut has chosen 6 RS18 subwoofers, because they can be run in cardioid mode. “The GEO S12 combination with the GEO M6 as frontfill/sidefill works very well. We can rig it fast, and get a very satisfactory end result.” He is using Yamaha CL5 digital consoles at front of house and for stage monitoring, and running the system over a Dante network. “This gives us a lot of advantages, having speakers and amplifiers (NEXO NXAMP4x4 and NXAMP4x1), consoles and Shure radio mics all working in one big STABLE network: this provides only benefits.”

Helmut Lotti, Bart Faut and the Revolution Event Support team are already working on logistics for a new tour to start in the autumn of next year.
www.revolutioneventsupport.be