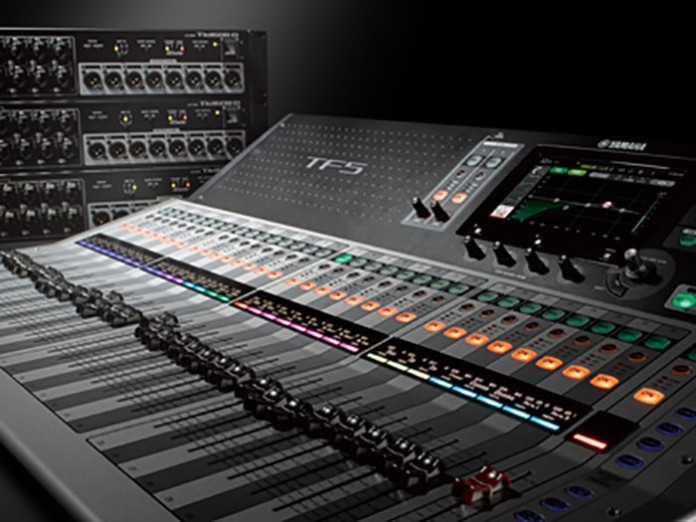 Yamaha has released a major firmware update – Version 2.0 – for its TF series of digital mixers.

The update features a number of improvements to allow faster and easier setup for use in a broader range of applications, including connection to up to three Tio1608-D i/o units. Reflecting the improvements, the TF StageMix app has also been updated to Version 2.0

Since its launch in 2015, the TF Series has earned a very positive reputation for its intuitive TouchFlow Operation interface and intuitive, compact design. The firmware update was developed in response to users seeking to expand TF Series systems for larger spaces and a wider variety of applications, using Yamaha’s Tio1608-D rackmount i/o units.

TF Series users can now easily configure multiple-channel digital network systems with a single Ethercon cable using Dante networking. The TF’s already extensive input/output capability can be easily expanded by adding up to three Tio1608-D units with the optional NY64-D expansion card, via the console’s QUICK CONFIG mode. This only takes a few simple steps to set up, with network settings and audio patching set automatically, allowing users to very quickly set up an audio system with up to 48 inputs and 24 outputs.

Along with the V2.0 firmware update, Yamaha’s TF Editor software for Windows and Macintosh – which provides flexible offline setup capability – has also been upgraded to version 2.0, while TF StageMix for iPad has been improved for more seamless wireless control of TF consoles.

“The TF Series has already received a very positive response for its intuitive interface and straightforward workflow,” said Ken Hiraoka, Yamaha PA Department Manager. “With the V2.0 update, users can now adapt their TF systems to a broader range of mixing environments and applications, thanks to the addition of new functions and Tio rack compatibility. Existing users can also benefit from the expanded flexibility of the new update. And with the long-awaited release of Tio1608-D, the TF series can be adopted to wider range of applications.”

Version 2.0 of the TF firmware and TF Editor can be downloaded from the Yamaha Pro Audio website, with TF StageMix available from Apple’s App Store. All are free of charge.