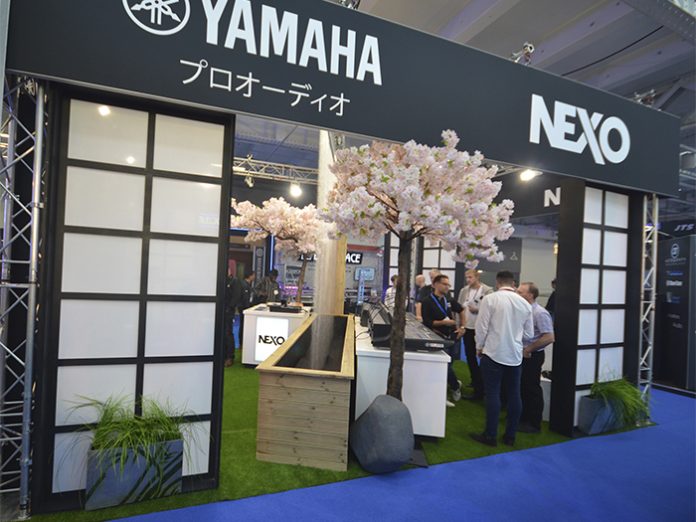 In mid-September, a small piece of Japan appeared in West London for three days and it proved a real talking point, as Yamaha and Nexo exhibited at PLASA London.

The stand was the brainchild of Chris Irvine, Yamaha Commercial Audio (UK and RoI) marketing manager, and Gareth Collyer, Nexo sales manager (UK and RoI). PLASA London tends to attract a high number of students and, with a shrewd eye to making the most of any free publicity generated by the ‘Instagram generation’, they created a stand themed as a Japanese garden.

Complete with trees in flower, grass, boulders and a central water curtain, the stand was a major talking point throughout the show. With a continual stream of cameras and smartphones aimed at it, the strategically-placed company logos ensured all viewers would know whose stand it was.

It wasn’t just about the pictures, though. This year Yamaha highlighted the long-term success of the company’s digital mixing consoles by showcasing the latest Yamaha RIVAGE PM7 system next to a Yamaha PM5D, one of its most famous products. Loaned for the show by Britannia Row Productions, with an information panel about the number of high profile artists that particular console has worked with, the PM5D was a major talking point.

“The PM5D really drew people in. It was notable how many professional engineers walked on to the stand and greeted it like a long-lost friend,” said Irvine. “We then guided them to the adjacent RIVAGE PM7 and showed them how much more advanced our latest console is.”

“We knew we were taking a bit of a gamble by trying something new with the stand design and giving up floor space for legacy product over new/current product. But, on reflection I’m very pleased to say that it worked,” said Irvine. “We had plenty of visitors to the stand, great conversations and many compliments and photos being taken of the stand itself.”

“The stand certainly was one of the show’s major talking points and, as Chris says, we had a very good level of visitors, with a lot of good opportunities to follow up,” agreed Collyer. “The problem now is, how do we go one better next year?”