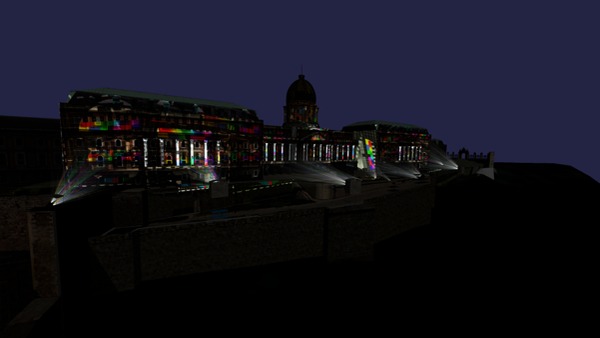 The video mapping was projected on the 300 metre wide façade of Buda Castle, with a total projection area of 9,000 square metres. A team of 50 people and 48 Panasonic PT-RZ31K WUXGA resolution high-brightness laser projectors in ten projection positions, mounted on 41 tons of scaffolding.

“It was a hugely challenging project, largely because of its sheer scale,” said Varga (aka ‘Mad Trip Design’). “For example, with a surface 300 meters wide, identifying the optimum projection positions wasn’t easy. The terrain in front of the castle, with its parapet, trees and big differences in ground level, made it even harder. However: once we’d worked out the positions, I’d obtained the fixture files earlier, so calculating with the real lenses for the projectors was very straightforward.”

Varga noted that, such was the scale of the project, even with the power of a dual Xeon (12 cores in total) custom workstation, SLI-configured with dual NVIDIA TITAN 6 Gigabyte graphics cards, the initial model was too large to handle, and required to be optimised. “I was able to try out some of the new features of wysiwyg R39, such as the 360° image export capability,” Varga continued, “which delivers some really impressive renders, easier fixture-by-fixture shaded view settings and some amazing press features.”

“Another new feature is improved support for AutoCAD, making the import and export of DWG/DXF files much easier and much faster,” he added. “Not only is that good for us, it’s good for the client too,” Varga added.

wysiwyg R39 includes numerous new features that make it more secure, simpler and faster to use, while existing functionality has been enhanced, and new capabilities added. Varga concluded: “When we work on projects using wysiwyg, we can work on the same platform with the set designers, the lighting and video crews. I’m looking forward to working with wysiwyg at a large number of festivals in Hungary throughout the rest of the year.”