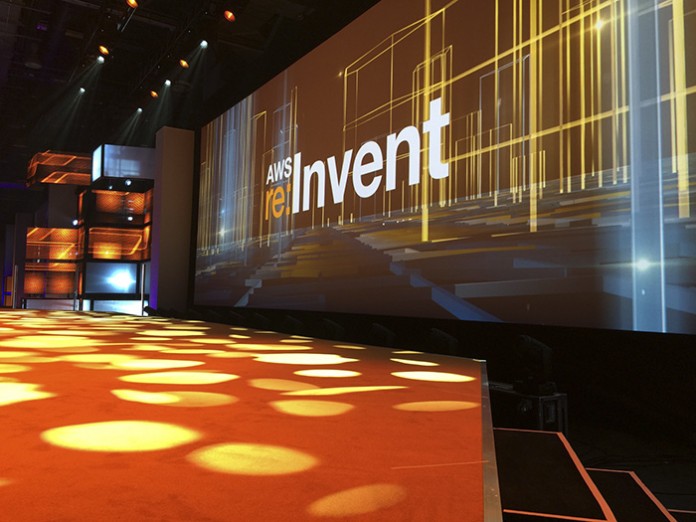 “This was our third year at the conference,” said WorldStage Account Executive Michael May. “AWS re:Invent 2015 drew about 19,000 people. It was one of the largest conferences to date for user groups from around the world.”

WorldStage filled extensive video needs for the conference. Five 60ft wide screens formed a panoramic display of 300 linear ft behind the main stage for speaker support. At times, content spread across the entire width of the exhibition hall for a truly immersive visual experience. Seven additional delay screens were used for audience viewing.

“We used one of our new 3G fibre distribution systems to feed signals to projectors,” May said. “Projection and rigging were a challenge for this event: Our projectionists were dealing with a compressed load in schedule and 34 projectors flown over a space the size of two football fields.”

WorldStage Programmer Alex Bright operated an extensive Dataton WATCHOUT 6 system for the conference – the first large-scale use by WorldStage of this major upgrade. Three Vista Systems Spyder X20 image processors were used for screen switching and to open up PIP windows on screen to display video modules, computer graphics supplied by the client and computer demos on stage.

On the audio side, WorldStage provided a d&b audiotecknik distributed speaker system. “It was noteworthy for its distribution and size: over 20 points of sound throughout the hall,” said May. The company also supplied a Yamaha CL5 console with Dante network system and a Riedel intercom system, which took advantage of its point-to-point programming for individual communications.