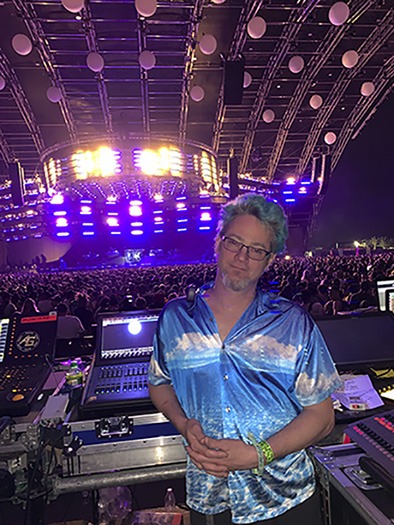 Wiz Khalifa’s Coachella performance was filled with dramatic moments. But for the Grammy-nominated star’s longtime lighting designer Jason Bullock, the real drama started about 24 hours before the show began.

It was then that the New York-based LD received the ChamSys MagicQ MQ500 desk from Upstaging that he would use to run his 90-universe show. “Coachella is a very important festival for all artists involved, so there was some pressure,” acknowledged Bullock. “I didn’t see the ChamSys desk until I arrived at the festival. I built the patch and show file in a Viz room on the site. Being able to build a show with a few hours and only get on the lighting system for three hours made time of the essence. ChamSys was the ideal tool, given that I was in a crunch.”

“The Sahara Tent at Coachella was primarily EDM acts,” said Bullock. “Since Wiz brought the entire band with him, I decided to make the show completely different than the other acts by going in the direction of a more classical rock show. Our beautiful set, which was designed by the team from Nimblist, made it easier to create this kind of look with its band risers and large centre gate. We also had a powerful video display from Screenworks NEP that covered the front of the set and added to the intense vibe.” Bullock controlled a universe of Catalyst to send multiple outputs to the massive amount of video surfaces on the set.

“My whole show was punted,” said Bullock, who ran all the FX, video and lighting. “Wiz is a very prolific artist, so there’s always lots of material to learn. Even right up until showtime at Coachella there were still alterations to the set list. After eight years of being with Wiz, I have developed a formula that works for his show.”

The friendly layout of the ChamSys MagicQ MQ500 Stadium helped Bullock at Coachella. “I like how the MQ500 has a row of buttons over the playback faders,” he said. “This gives you way more options for layering different fixture functions. With the larger screens and a few added buttons, the MQ500 is really a great upgrade. It’s also helpful that the software is consistent. If  you’ve  worked on any ChamSys product before, you’re on very familiar ground.”

Bullock credits his team with helping the Coachella show run smoothly. “Justin Collie and Nathan Wilson from Nimblist, my video content people Dark Matter and Matthew Fuller all contributed to the success of this project,” he said. “This show and the challenges involved were very stressful. My team helped, and so did my ChamSys. With ChamSys I have one less thing to worry about.”