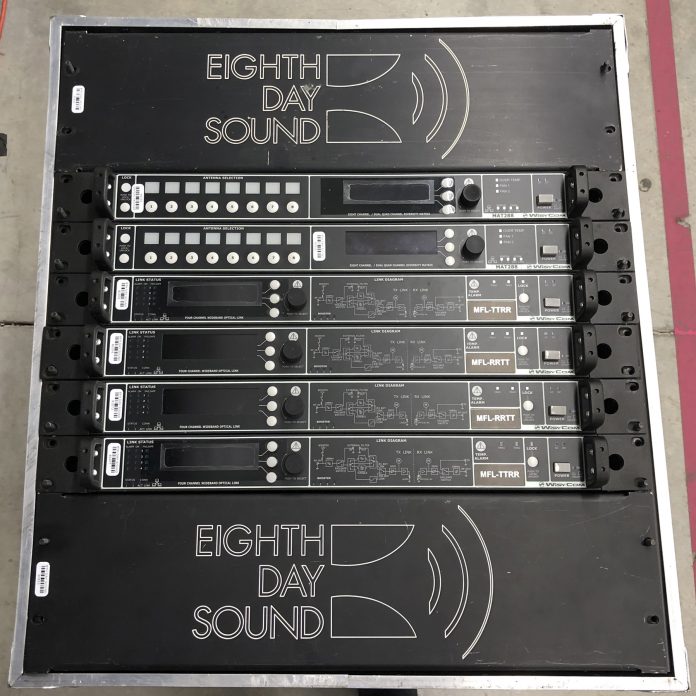 In the touring industry, RF coverage is always a concern as many large-scale productions need to accommodate big venues and, in some cases,high-flying, wide-reaching performances. Eighth Day Sound’s two most recent high-profile global tours turned to Wisycom’sMAT288 Matrix Combiner and MFLRF-Over-Fiber AntennaSystemto ultimately gives sound engineers the tools necessary to cover the extensive wireless needs for these exceptionally large projects.

For Eighth Day Project Manager Jordan Kolenc, creating an RF design that would provide maximum coverage for one such major stadium tour left him with a long list of concerns, and a need to preemptively find solutions.

After much trial and error with products from other manufacturers, Kolenc reached out to Jim Dugan, president of Wisycom USA, who visited EighthDay’s shop to demonstrate how Wisycom’s MAT288 combiner, along withitsMFL antenna system, could provide expansive coverage for live touring applications.

The MFL Fiber Rack Unit provides coverage farther than the 300 feet limit found in coaxial cable, making it ideal for stadium-sized tours. Additionally, the Wisycom MAT288 Matrix Combiner allows sound engineers to actively and effectively make adjustments that pertain to and affect the microphones and instruments, while the MFL does double duty by extending coverage over fibre for the in-ear transmitters.

“Wisycom is the only company that I know of that can handle the RF distance that we were trying to cover,” said Kolenc.“The company’s wideband capabilities are the largest in the industry. The fact that we can also use them with any of the other manufacturers’ packs that we are already running makes them a cost-effective addition to our arsenal of gear. In addition to coverage, Wisycom’s ability to handle antenna switching in a stadium or other large-scale environment is unparalleled.”

For Kolenc’s recent tour, RF coverage needed to span to aerial elements on which the artist performs, as well as her descent back to the stage. To accomplish this, with guidance from Wisycom, the Eighth Day team arranged a series of fibre links between multiple locations to handle relay signals for the antenna system. This ensured a clear and uninterrupted performance for fans, and also kept a continued transmission to the pop artist’s ears at all times.

According to Kolenc: “This is the biggest system we’ve implemented at Eighth Day from an RF standpoint, in terms of overall coverage area. No one has really done this before. What we needed doesn’t actually exist, yet, in an out-of-the-box solution. Jim [Dugan] was able to utilize Wisycom’s RF equipment in conjunction with other gear to make it all happen. These tours solidified our decision to own the Wisycom gear permanently.”

As one of the biggest touring companies in the United States, Eighth Day has now expanded globally.

For Kolenc’s recent tour, he brought the MAT288 Matrix Combiner and MFL Fiber Rack Unit overseas to stops in Europe, Asia, and Australia. “When we looked at how we were going to design the system, international compatibility was a major factor for us,” he added. “With Wisycom, we can use the gear everywhere we go, both domestically and internationally.”

Kolenc has been with Eighth Day for over a decade, working as a project manager, monitor engineer and mix engineer, as well as in a technical support capacity. Adding Wisycom products to the Eighth Day inventory allowed Kolenc to create a uniquely large RF system that project managers can continue to use on future tours.