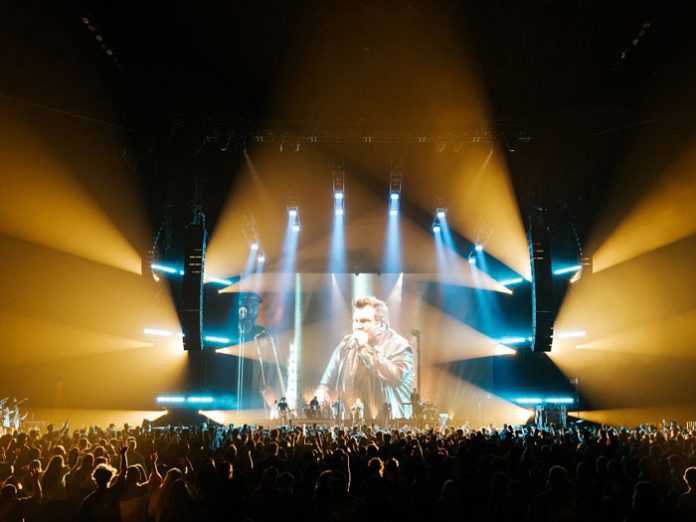 After a few years with an in-the-round design, the tour returned to an end stage arena design, allowing the space for a large upstage LED wall. Due to an 8 mil blow through LED panel, Production Designer Jerry Holcomb was able to place Elation Paladins behind the wall.

“With the tour having several more worship-oriented bands, we knew we needed a lot of upstage light looks punching through the bands,” Holcomb explained.

To accomplish this, Martin MAC III Profiles are placed on the upstage end while the trusses are loaded with Elation COLORado Solo Battens, and low side truss on the both sides continue the low upstage lighting looks.

“We are using a large amount of the Solo Battens, and Bandit worked out a way that they can stay on the truss during transport which saves a lot of set up time,” Holcomb said.

“The fixture I’m the most impressed with are the MK3’s,” shared Lighting Director Kurtis Wheat. “I picked them kind of “sight unseen” because I needed something new that could do everything I needed it to do. It did everything and more. It’s an extremely impressive and versatile fixture that I think will be a workhorse for a long time.”

Wheat also chose Robe BMFL for the tour’s Follow Me system, with most of those traveling in the Bandit provided Tyler truss and four on pipes upstage.

“Each year I look forward to seeing the direction the Winter Jam lighting design will take,” said Bandit Lites Business Development Officer, Brent Barrett. “Working with Jerry and Kurtis is always an adventure that includes creativity, honesty, realism with a good amount of humour sprinkled in! I know that each design will be a new concept and not simply a recycle of the previous year.

Jerry and Kurtis have both become friends that go well beyond business associates; I am very appreciative that Bandit is allowed the opportunity to be a part of the Winter Jam Production family!”

Bandit’s crew is comprised of Nikki Dotson, Darryl Newcombe and Cody Cheatham, and Holcomb offered that calling them a great crew would be an “understatement.”

“Bandit shows up completely prepped and ready,” praised Holcomb. “Load in and load out of even the first rehearsal days went as smooth as could be.”

“Bandit always has their stuff together,” finished Wheat. “It is one thing that I know we don’t ever have to worry about it. If I ever have an issue with the rig, I just have to mention it once and it’s taken care of before I can even finish my thought. The crew is always on top of their game and it leaves me feeling confident every single show.”