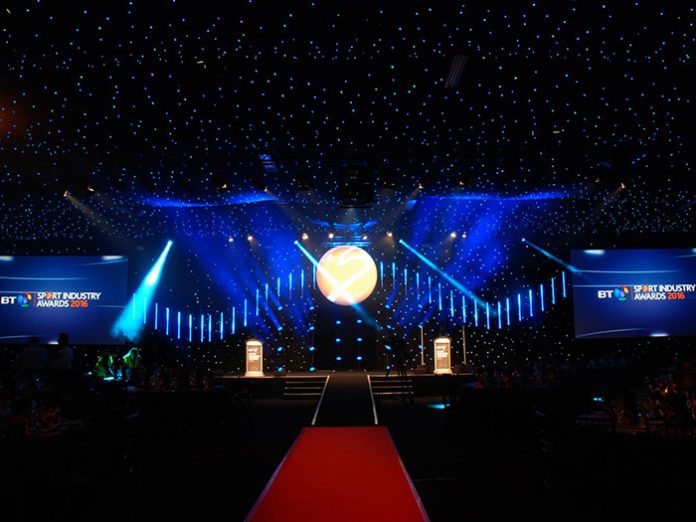 The 15th annual BT Sport Industry Awards saw 1,750 of sport’s most influential names come together to celebrate the best in the business. The event was held at Battersea Evolution, with guests including Prince Harry, Victoria Pendleton, David Haye and Anthony Joshua. As with any award ceremony, lighting played a pivotal role and White Light was called upon to provide the equipment, which included the use of video-mapped LED meteor tubes.

The Lighting Designer for the show was Quentin Jarman. He commented: “I have worked on the awards for several years now and each year I try to come up with something different and push the boundaries of what can be achieved with the lighting.”

For this particular ceremony, Jarman drew on a series of meteor tubes that are part of WL’s extensive equipment inventory. He added: “The design for the show was created in conjunction with Capitol House Productions, the official production partner of the awards. They showed us the creative content they were going to use for the show graphics and we decided to incorporate this within the lighting. Knowing that WL had LED meteor tubes, this seemed like a great opportunity to create something truly unique.”

Jarman used a video-server to pixel-map the tubes and run media clips through them. He said: “We really managed to bring the tubes to life and ensure they played a holistic part in the evening. By running video content through them, it ensured that the lighting design was as vibrant and exciting as possible.”

Due to the complexities of pixel-mapping meteor tubes, Jarman visited WL’s base to fully prepare for the evening. He commented: “The tubes themselves have different lengths and orientations. Therefore I used the facilities at WL’s warehouse to perfect the pixel map and ensure everything was perfect for the show.”

Alongside the meteor strips, Jarman created a ‘blinder wall’ that consisted of Martin Professional MAC 101’s interspersed with Clay Paky Sharpys. He adds: “I used the Clay Paky Sharpys along with two-lite blinders to create the feel of stadium lighting, reflective of the awards themselves.”

In addition to the main awards space, Jarman was responsible for lighting all aspects of the event, from the red carpet and media areas, to the VIP and main reception spaces.

Jarman stated: “What was great about this event was that we were able to use lighting to really transform the spaces. For instance, once the main space within Battersea Evolution was used for the awards ceremony, we altered the lights in order to create a different mood for the after show party.”