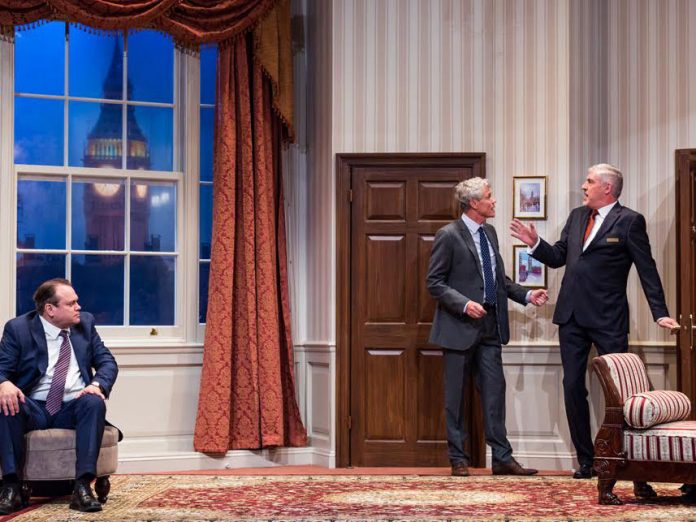 Winner of the 1991 Olivier Award for Comedy of the Year, Ray Cooney’s Out of Order is making a triumphant return to the stage. Starring television favourites such as Shaun Williamson and Sue Holderness, this classic farce will now embark on a nationwide tour. With its strong reputation as a leading supplier to UK touring theatre, White Light is providing the lighting equipment on this production.

Out of Order tells the story of Richard Willey, a Government Junior Minister, whose plans to spend the evening with one of the oppositions typists go disastrously wrong… this revival is being produced by Tom O’Connell and the Lighting Designer is Jack Weir. He commented: “Out of Order is a purposefully over-the-top, hilarious farce and typical of Ray Cooney’s work. The show takes place in real time, in the one location of a hotel room overlooking the London skyline. My role was to light the action and highlight the farcical elements which pervade throughout.

He added: “The set features several doors (with characters frequently coming on and off stage) and this really drives the action of the piece. Therefore, on a practical level, I had to ensure the play had enough coverage and that we believed the environment which designer, Rebecca Brower, had created.”

To achieve this, Weir drew on WL’s extensive equipment range to achieve his design. He commented: “I speciﬁcally chose the Martin MAC TW1. These offer a great deal of ﬂexibility; something that is vital when touring a show like this. When we visit venues, we have essentially less than a day for the ﬁt up so time is deﬁnitely of the essence. Similarly, we are visiting venues that range vastly in size from the Palace Theatre in South end to the Manchester Opera House. Therefore, we need to have equipment that is able to adapt to this and maintain the shows look.”

Weir commented: “I used a front wash which features four Martin MAC Aura LEDs on the front bar along with two MAC Quantum Proﬁles. These are excellent units for touring, owing to their small size, LED technology and weight”.

Whereas the play first premiered more than 25 years ago, this revival has been updated for a contemporary audience. Weir commented: “The action is very much set in the modern day. What this means is that I’ve not had to create a vintage feel out of necessity, so I have been able to utilise more modern LED technology in addition to tungsten for my design.”