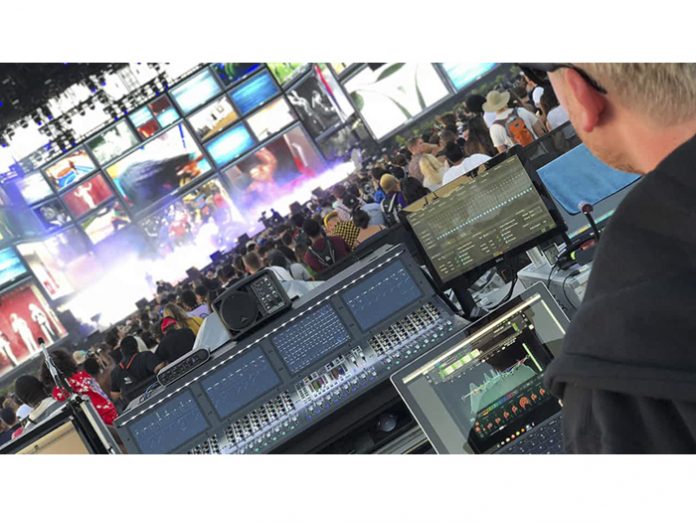 Tools from Waves Audio were employed by live-sound engineers for a variety of performers in diverse setups and consoles throughout Coachella 2018.

From Avid VENUE S6L (Kygo) and Avid VENUE Profile (The Weeknd), to DiGiCo SD10’s (Vince Staples), to SSL Live (Portugal. The Man) and Waves’ own eMotion LV1 Live Mixer (MØ). FOH engineers provided a peek under the hood of their productions, relaying which tools help them create a tight, spectacular-sounding show under demanding festival conditions.

Vince Staples’ FOH Engineer Robbie Barr has been touring with DiGiCo SD-series consoles nonstop for 5 years, mixing such acts as M83, Foster the People and Banks. His setup for Staples at Coachella consisted of a DiGiCo SD10 console, 2 Waves SoundGrid Extreme Servers (one for redundancy) and the Waves MultiRack plugin host.

“Running Waves plugins on MultiRack couldn’t be easier,” Barr said. “It helps me recreate my favourite dynamic and FX chains from the studio and tailor them to a live environment.” He continued: “The Waves F6 Dynamic EQ is a must-have. I love having it across my music buss, where I use it to tame unruly 808s or soften a surprisingly harsh synth track. Also, Vince’s vocal sound changes, depending on the style of the song and whether he’s cupping the mic or not. A static EQ setting isn’t ideal for that situation.

“The F6 dynamic EQ has solved that problem for me, in an intuitive way I’ve yet to see in a live plugin. Also, growing up on analog, a rack of DBX 160 compressors would make my day. I still love the sound of a 160 on a powerful vocal like Vince’s. I used to carry a lunchbox with one of the original hardware units, but the Waves dbx 160 Compressor plugin is so true that I now leave the hardware at home! The last plugin on my mix buss is the L2 Ultramaximizer; nothing is better at keeping the mix feeling in your face and hitting hard without resorting to uncomfortable volume. I just wouldn’t want to do the show without the Waves F6, dbx 160, L2 – and also, the NLS Buss Non-Linear Summer.”

Having toured with Bruno Mars for half a decade, Derek Brener has now been mixing tours for R&B/pop singer and producer The Weeknd for over 3 years. At Coachella, he’s been using an Avid VENUE Profile console to mix The Weeknd’s show. “I still like using the Profile,” he said, “Waves integration is effortless. It speeds up my process and enables me to just mix and be creative.”

About using plugins, Brener said: “My favorite plugins would be the Waves SSL G-Master Buss Compressor, SSL E-Channel and C6 Multiband Compressor. But my two absolute must-haves are the L2 Ultramaximizer and the V-EQ4 equalizer. I use the V-EQ4 post-compression on The Weeknd’s vocal since the EQ points suit his vocal timbre. It sounds like I’m using an actual Neve 1081 without extra gain stage. As for the L2, I use it more for its color than a limiter at this point, although it does help me immensely when I need that extra level in smaller applications. Not only has everyone become accustomed to the sound of the L2 – it also helps in getting you that extra 3 dB when you are already leaning on a system as much as possible, your ears are about to explode, and the managers are still telling you to turn it up! It’s a life saver in those situations.”

FOH Engineer Jon Schumann (Mew, The Ravonettes, Lykke Li) has been mixing Danish electropop artist/producer MØ’s live shows on Waves’ eMotion LV1 live mixer for well over a year now. “It’s a very simple system,” he said, “in which both myself and monitor engineer Jeppe Andersson are relying extensively on the eMotion LV1 software mixer and Waves SoundGrid technology. The LV1 is the backbone of our touring rig and we use the LV1 for monitors, too. The LV1’s sound quality is amazing, and the system is so flexible and light. I’ve managed to get my mixes to sound exactly how I want them, no matter if we’re playing a club or a huge festival like Coachella. And it’s so lightweight. We’re doing quite a few festivals this summer, and it’s great to be able to pack up our entire small creative ‘office,’ check into the airport, and put it all on the plane to fly with us wherever we go on tour.”

Schumann added: “Scheps Omni Channel has become sort of my godsend plugin. I use it on most of my vocal and drum channels. I also use the LV1 to create different scenes and snapshots for each song, so from song to song I can make radically different sound choices. On the drums, we’re using triggers along with the actual kit. I’ll hit the snare with the Smack Attack transient shaper and the Torque drum tuner plugins, so I can switch between a big rock sound to a very, very tight snare sound just by changing two presets. To control feedback and stage noise, I use the PSE Primary Source Expander plugin. PSE works really well combined with the Scheps Omni Channel. I can use the Scheps Omni to push in some of the preamp’s harmonics, without soaking up a lot of the other stuff that’s happening on stage. I’m able to keep MØ’s vocal very, very clear in this spontaneous kind of show, where it could otherwise get messy. And that’s what this LV1 setup is basically about. It gives us so much flexibility in controlling all kinds of situations.”

Eds John, whose credits include Orbital, Richard Ashcroft and Dave Clarke, was helming the boards for popular Norwegian DJ/producer Kygo, using an Avid VENUE S6L-32D console, a Waves WSG HD card, two Waves SoundGrid Extreme Servers, and a d&b GSL speaker system. “Quite a few plugins are must-haves for me for a show like this,” John said. “The Waves dbx 160 compressor and H-Delay plugin are favorites. I love using the C6 Multiband Compressor on my master buss; it’s a real mix glue for me. For the same reason I also use it on strings and vocals groups. Can’t do without this plugin. Another one is the Waves BSS DPR-402 compressor, which I insert on all my vocal channels – ten in total, as we have many guest singers. It’s always been one of my favorite hardware compressors, so when the Waves version was released I bought it straight away, and it did not disappoint!”

Offering comprehensive real-time, low-latency processing, recording and networking solutions for live, broadcast and theater productions, WavesLive tools place studio-grade processing in the hands of FOH, monitor and broadcast engineers for leading performers and renowned productions worldwide. From equalizers, compressors, reverbs and delays to metering, stereo imaging, surround tools and beyond, Waves’ award-winning plugins can be used with virtually any console.