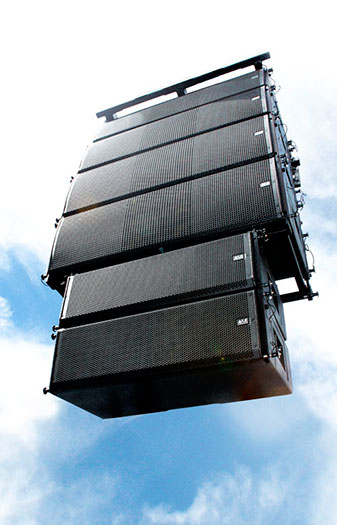 VUE Audiotechnik Europa will introduce new VUE loudspeaker products in booth 3.1J40, at Prolight & Sound in Frankfurt. The VUE booth will unveil new products in the al-Class and h-Class range, and present the technologies behind VUE’s most distinguished products.

The central focus will be on the much-awaited addition to the al-Class Line Array Systems. The European reveal of the al-12 system will extend the VUE al-Class to address large-scale applications while showcasing VUE’s CST technology across the series. The al-12 exhibits all new component designs across the frequencies and is optimised for more demanding applications, making the al-12 a remarkable stand-alone product on its own merits. It also further expands the existing al-Class products into a fully scalable system by eliminating any sign of a transition or coverage gap from its largest 12-inch system to the smallest 4-inch al-Class member.

Also being introduced is the most powerful h-Class subwoofer to date, the self-powered hs-221 with patented ACM technology. The powerful double 21-inch subwoofer has a surprisingly compact footprint to output ratio, making it a cost effective investment and a smaller truck pack. The hs-221 subwoofer is aimed at the touring market, with the extremely demanding EDM market perhaps standing to benefit the most from its reliable, superior low-end performance.

“We are very excited to introduce our new products to the European market,” said VUE CEO Ken Berger. “The al-12 expands our reach to the large format touring market and can address the most demanding and prestigious permanent install needs. This system will provide the ability of current VUE end-users to expand their inventory and grow beyond their present markets, while maintaining 100% use of their existing al-Class inventory.”

Examples of each of VUE’s product classes, along with the latest Dante audio networking enabled systems, and the newest version of the systemVUE software will be shown. Interested visitors will be treated to a by appointment only demo of VUE’s self-powered h-Class systems in a meeting room environment. Mega Audio, VUE’s newly appointed distributor for Germany joins VUE Europa and official representatives from Italy, Norway, and Netherlands, for appointments at the show. Personnel from the Escondido, California headquarters will also be available for meetings.