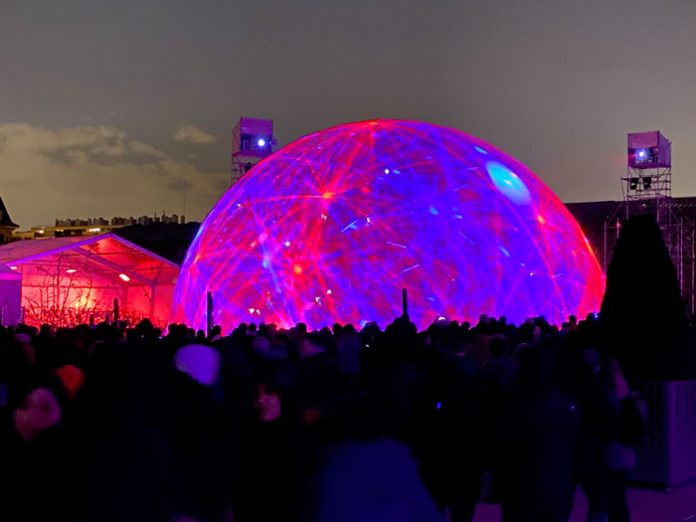 On February 26, 2020, at the Jardin des Plantes in Paris, a unique immersive symphonic concert was given by French violinist Renaud Capuçon and 40 musicians. Virtual Harmony took place under a 300 sqm dome with projection mapping. The immersive experience was powered by the Modulo Kinetic media server by Modulo Pi, and its new module for automatic blending and warping used as a preview.

To put the spotlight on 3Dvarius, the first 3D printed violin by Dassault Systèmes, a unique immersive symphonic concert was organised in the Jardin des Plantes in Paris.

Internationally-renowned violinist Capuçon and 40 musicians were installed under a 300 sqm dome on which media were projected.

Attended by 3,000 people surrounding the dome, the musical and visual experience was also streamed live on YouTube.

Event company Mvision oversaw the technical set-up for the event. To project onto the entire dome surface, 12 video-projectors of 30000 lumens were used. The video-projectors were fed by Modulo Kinetic, the fully integrated media server by Modulo Pi.

To seamlessly project media on the dome screen, Modulo Kinetic’s new auto-calibration module was used as a preview. Thanks to the auto-calibration system, the soft edge blending and warping was automatically calculated and implemented by Modulo Kinetic for the 12 video-projectors installed, resulting in a seamless image across the 360° dome. Renaud Gindre, Technical Director, worked on the video-projection beforehand: “In the showroom of Mvision, I could install a scale model of the dome to make all necessary tests and make sure the video-projection would work fine.”