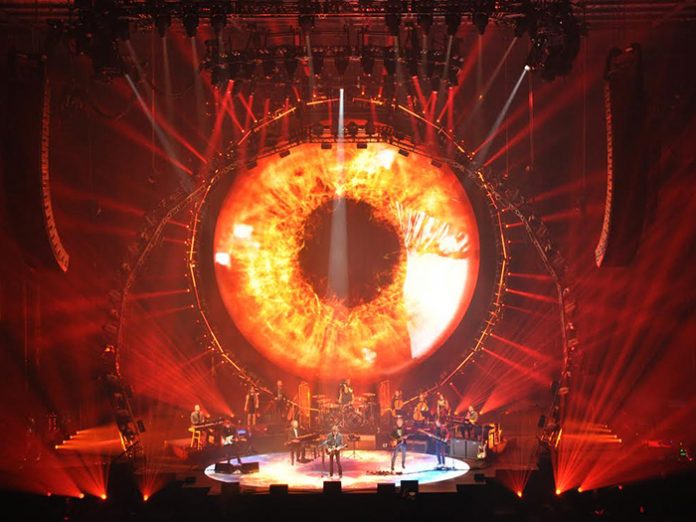 The current tour by Jeff Lynne’s ELO has been eagerly awaited; reviews of the new album Alone in the Universe have only raised that expectation.

For Show Designer Tim Routledge, this was a solid foundation to build upon. He said: “To create a beautiful show you have to have balance and a big part of that, in technology terms, is the critical relationship between all the visual elements of the show and the music.”

The video system for the tour is supplied by Video Design. “Unusually for an arena tour, all the video is LED; not just the twelve-metre circular central screen and the large floor surface ellipse, even the two IMAG screens to the sides are LED,” explained company MD Alex Leinster. “Tim has commissioned some beautiful graphical animation from Ben IB, that’s one good reason why Richard Shipman, an expert in running content for live shows, was engaged for the tour.”

For this tour Shipman’s skill was in working dynamically throughout the show to ensure the balance Routledge desired. “The key is output levels,” said Shipman. “The desired balance changes song to song. There are a variety of considerations; between the floor LED and the back screen; between video and the prevailing lighting state and between venues: audiences and rooms can exert a big influence.”

Routledge agreed: “The content has to respond to the prevailing atmosphere within the auditorium. Fortunately, Richard and I have toured several times together and we both feel strongly about this, that’s why we have him and his control system out front for the show, so he can respond accordingly.” The content runs off -d3 technologies] servers as part of the Video Design package, “the d3’s also provide a feed to Lighting Director Matt Pitman’s [MA Lighting grandMA2] desk,” added Shipman.

“So he can control video into the Sceptron pixel strips that delineate the lighting trusses. That again is a subtle influence by Tim toward balance, blurring the line between light and video.”

Definition is key, the centre screen is 1280 by 1280, the floor 1600 by 960. IMAG Director Matt Askem had a four camera rig to feed the side screens which are the same 9mm pixel pitch as the centre circle. “I’m very pleased with the way this has gone and how the technology has performed,” concluded Routledge. “The work of Richard on video and Matt on lighting underlines the attention given to the varying control of level and balance to draw the dynamic of the show.”