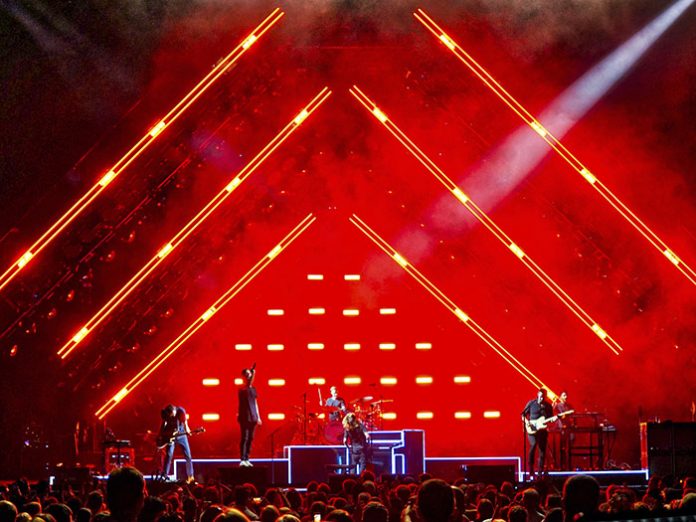 VER is carrying out the design by providing a turnkey production to the tour with lighting, video, audio, automated rigging and crew.

Discussing the design inspiration, Butts notes that since this was his and Kapoor’s first time working with OneRepublic, that their concept for the band began with a band branding in mind.

“When you think of other bands, like U2 and Nine Inch Nails, a major element that you think of is their production design. They have a visual vocabulary and a style unique to them. So we wanted to think of what a OneRepublic show looked like, tailored to their style and personality,” Butts explained.

“We started thinking about having an architectural element to it – clean, like you never see trusses, just light sources. We wanted something modern, edgy, different from the past. That led us to this design.”

While the show has a big look, it’s not a big production, packing into six or seven trucks. OneRepublic’s Production manager Zito gave them the space and budget limitations: “We’re doing sheds, we’re not spending tons of money. We want something that looks impressive.“ he said.

To stay on budget, but still offer a wow factor, Butts said their first decision was to turn 10 straight trusses on their sides, creating a triangle rather than the normal square shape of most rigs. The triangular shapes extend to the LED walls on either side of the stage, on which the I-Mag is displayed.

The clean, sleek aesthetic extends to the band risers, which are a custom fascia made of high gloss metal with backlit LED tape. Even the custom piano is outlined with pixel control LED tape and internal uplighting.

Cutting back on video content creation also helped to kept the budget in line. A software product called VideoDust offers real time effects for video, so the team can make the I-Mag coloured or altered rather than just using straight I-Mag.
‘One Continuous Neon Look’

The core of the rig consists of 103 Ayrton Magic Panels 602, with 62 Claypaky Mythos as the hard edge fixture. The 28 floor lights are all Sharpy washes. A row of GLP 18 X4 Bar 20s line the downstage edge. In the upstage wall and embedded in the overhead trusses are 54 Showline Nitro 510C strobes. Then the architectural piece: the six trusses are covered with a custom fascia, on which are mounted a line of 100 of VER’s Revolution Blades with a flat smoke diffusion on them. The effect gives the appearance of one continuous neon look.

“Having good ideas mixed with good programmers are a key element to a successful result: that’s where Programmers Brian Jenkins, who programmed a majority of the songs, and AJ Pen came in.”

Butts chose the Mythos because they are small and lightweight, while the Sharpy washes, Robe BMFLs, VL 3500 spots and and other fixture specs were driven by economics, he said. And by using the older version of Ayrton Magic Panels, the team was able to get the fixture count they needed.

When it came down to finalising and setting the overall look and style, the designers shared their ideas in concept meetings with the band and just try to imagine what they thought when they were told only five colours would be used in the show.

Except for one song in repertoire, the entire show only makes use of ‘no colour’, warm dirty white, ‘cool, no colour’ – like a CTB, plus red and blue.

“It’s so simple, and it was a creative choice to have a limited colour palette,” Butts explained. “Because of the dynamics, we decided rather than do big colour changes, we would swap half the rig, turn off half the rig, or the dynamic would come from the strobes or the Magic Panels. So colour becomes almost secondary to what the show is. We wanted it simple and clean. The ‘no colour’ and warm or cool light became its own dynamic. We wanted to make a statement.”

“I have two rules with Magic Panels:1) they never look like Magic Panels, and 2) you never use the same selection twice in the show. So now the dynamics of the show are pixel selection, creative groupings and strobe hits, rather than colour. I almost exclusively use high side BMFL followspots to light the band, frequently in a colour to reinforce this look. My goal was – it’s OK to have an entire segment of the show be in a single colour, because we are leveraging all these other dynamics in different ways. We felt this was a key part of a OneRepublic show: edgy, modern and different.” Butt concluded.