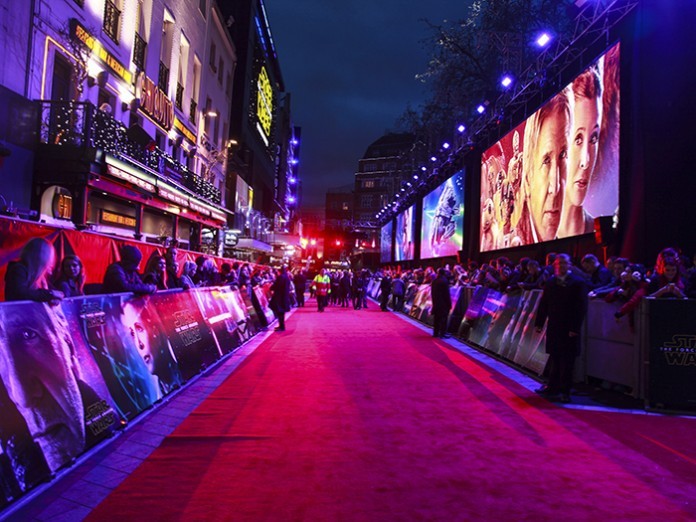 The European premiere of the hugely-anticipated Star Wars: The Force Awakens came to London, with Utopium on hand to illuminate the red carpet royalty and Nelson’s Column.

Thousands of dedicated fans flocked to London to celebrate the latest instalment in the Star Wars franchise, where stormtroopers and Jedi knights joined the cast and celebrities for the biggest premiere of the year.

In Leicester Square, the cast and crew were joined by celebrity guests as the area was transformed into a space-themed venue befitting this colossal event. Utopium installed 120 tonnes of ballast weight to stabilise the 26 masts supporting 175m of 52cm ST header truss, from which the lighting, 10 29 metre video walls supplied by VER, and over 1,000 metres of black wool serge drapes were rigged. The black drape, which masked the background, worked to create a visually stunning effect on the red carpet.

The installation was designed and project managed by Utopium’s Colin Bodenham, he commented: “This was such a spectacular premiere to work on and we are proud to have been contracted to provide the lighting and rigging for this prestigious event.

“Star Wars is all about dynamics and future tech which gave us great scope to be creative. Illuminating the 52 metre high Nelson’s Column to create a giant lightsaber the moment the premiere ended was a unique finale to the evening.”