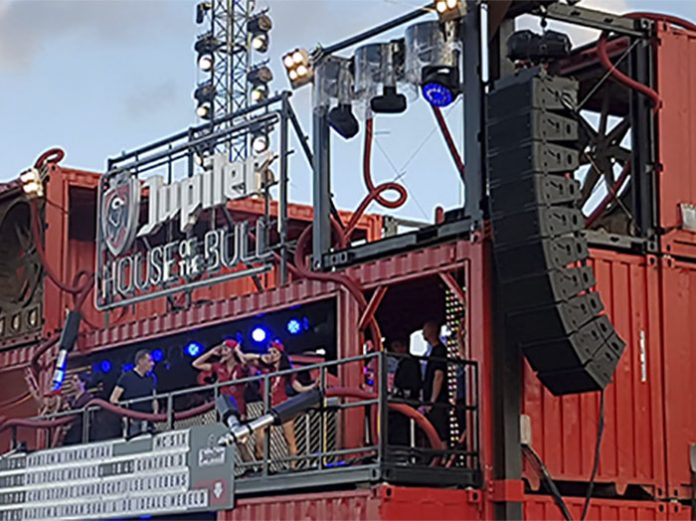 For the third year in a row, Turbosound Flex Array has been the weapon of choice for Rock Werchter’s Jupiler House of The Bull Stage.

Responsible for blasting out club music at the Stage was the largest Turbosound Rental Company in the Benelux, Splendit. “For nine years we have taken care of the Jupiler Stage, and for nine years in a row we have deployed Turbosound,” stated Marijn Broeckaert of Splendit. “The popularity of Jupiler has soared so three years ago we upgraded from our original and legendary point source Floodlight system, to the modern Flex Array which has delivered exceptional improvements.”

Broeckaert continued: “The Turbosound Flex Array has a 75 degrees dispersion with a sound quality and power that is unmatched for a box with such a small footprint. It is able to deliver clear, directed sound which we have received nothing but compliments for.”

The Jupiler Stage, which attracts up to 15,000 fans per performance, consisted this year of two hangs of six TFA600H and four TFA600HW cabinets, with 12 TSW218 subs left and right of the stage. Additionally two TQ445DP were used for both infills and outfills. For sidefills on the terrace there were three TFA6000HW per side.

DJ monitoring was taken care of with two TQ425DP and two TQ445DP. The bar located inside the stage contained four iQ18 subs and four iQ12 tops and rounding off the spec was a MIDAS M32 used for routing and mixing of the DJ’s.