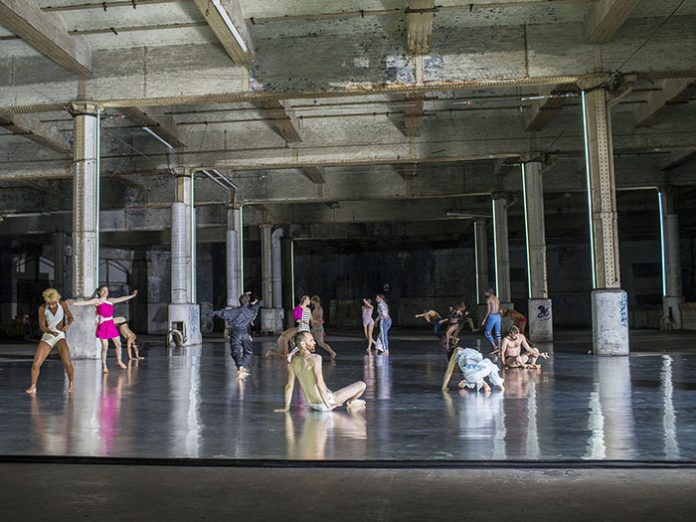 Audio specialist tube uk delivered sound systems to a diverse mix of over 30 shows, site specific installations and one-off performances in a variety of venues across the city throughout the 18-day Manchester International Festival 2017.

Tube’s Melvyn Coote oversaw all the projects, collaborating closely with festival’s Technical Director Jack Thompson.
The tube project management team of Adam Taylor, John Redfern, Dan Steele and Coote ran the numerous jobs from a pre-production and planning aspect – then a top team of 7 warehouse and logistics staff, headed up and orchestrated by Jamie Sharman, implemented the equipment preps and the hectic delivery schedules.
A further 15 – 20 regular freelance engineers and technicians implemented the installation, rigging and operating of the various shows and gigs.

The pace was relentless with tube’s crew working 16-hour days for most of the period, so it was essential to have a team who could function well on minimal sleep and under serious pressure to deliver amazing service keeping good humoured throughout.

“The whole team was fantastic,” enthused Coote after a hugely successful and highly acclaimed festival that entertained and enthralled with a raft of invigorating new works. “The passion, dedication and commitment by everyone has been incredible,” commented Coote.

All the kit that tube owned was deployed, leaving a bare warehouse. It worked hard throughout the event for which the company supplied 80% of the audio requirements – from full theatre productions to small idiosyncratic installations, from banging DJ systems to refined orchestral and spoken word PAs, most of which were unconventional and challenging, needing lateral thinking and creative implementation.

Equipment from a wide range of brands was featured, including d&b, Tannoy, Yamaha, Sennheiser, DPA, Crown, Crest, QLab and MAX.

There were many challenges. The advanced logistics of what needed to be where and when was a real brain-teaser, together with the scheduling and time-planning. This had to factor in transportation, rigs, de-rigs, preps and re-preps and on top of that, the different facilities on offer at the venues and what was needed for rigging and physical installations in the found spaces.

Venues ranged from regular theatres and concert halls to site specific gems like Mayfield depot, and incorporated everyday public locations like the elevator concourse between Selfridges and Marks & Spencer or Victoria Station, St Anne’s square, Whitworth Park and numerous others.

Tube also supplied the PA for the Opening and Closing Ceremonies.

A ground-stacked d&b V series PA was installed with M4 monitor wedges and two Yamaha QL5 consoles, one for FOH and one for monitors which ensured the large and exuberant crowds could hear the catwalk show soundtrack played live by music-maker and producer Graham Massey assisted by an unexpected mix of local musicians.

“Ceremony” was a world premiere by Turner-nominated artist Phil Collins, an amazing collage of two films to conclude 18 extraordinary days of art, passion, performance and engagement.

For the full duration of MIF17 four separate sound systems were built in different venues at the main ‘Festival Square’ hub in Albert Square just in front of Manchester Town Hall.

The Pavilion was a large tepee multi-purpose space with a lively programme primarily of DJ based performances which rocked till late.
The Pavilion Theatre was a 500 capacity live stage hosting an extensive range of bands who utilised a d&b Q series PA and Yamaha control, together with the facility to accommodate monitors and other rider extras as requested, complete with a standard wired mics package.

Another system was installed on the Outdoor Stage used for a range of presentations and showcases, mainly for local acts. And the Glass House was a double-decked, clear-skinned structure serving as corporate hospitality space at one end of the square, hired by various companies and organisations throughout the event, whose guests could catch the heartbeat of the festival.

The tube team utilised Bridgewater Hall’s house sound system as part of their left-centre-right speaker configuration – the centre being used for the vocal narrative and a separate left/right d&b V series system for the orchestral and playback elements. A Yamaha CL5 desk – fully loaded with 68 channels of inputs and 22 outputs – took care of the orchestra mix, with the BBC taking split feeds for broadcast.

Another d&b V Series was installed in Upper Campfield Market Hall for the powerful and emotive Cotton Panic devised by Jane Horrocks, Nick Vivian and the band Wrangler. An impelling medley of gig and gripping performance art unfolded the story of the Cotton Panic that devastated the north of England in 1861 as the US Civil War set in thousands of miles away. It also made the connection to today’s textile industry, the influence of international trade deals and the far reaching potential of their consequences for everyday people.

The need was to have the clear visceral sung / spoken narrative audible above a growling, grooving sound track – the task was fine-tuned beautifully by the tube team.

Across the other side of the city in Mayfield depot, the dilapidated charm of this derelict industrial space provided the perfect backdrop to 10000 Gestures, a hugely energetic immersive dance work created by one of Europe’s most daring choreographers, Boris Charmatz.

The PA was another d&b V8 series system, with V-SUBS in ground-stacked columns around the space where it became part of the visual set along with the striking steelwork and structural columns.
Control was a Yamaha QL1 and the design worked ideally well for the resonant and lively sonic space that is Mayfield.

To assist in presenting Susan Hefuna’s ToGather exhibition at The Whitworth Gallery, a free public event was staged that invited local residents originally from faraway places to trace their individual paths through Whitworth Park. Their movements were echoed by dancers from Studio Wayne McGregor inspired by the emotions experienced by the migrants as they walk around their new hometowns.

To transmit background sound between the five performances taking place five times only on one sunny afternoon, tube installed 20 Sennheiser LSP500 wireless speakers around the park that created an audio ambience. Each speaker was surrounded by a sculpture that was part of the exhibition.

Around the performance space, a d&b Y7P system was installed with Y-SUBs and a QLab playback system, controlled via a Crest analogue desk.

Coote and the team are extremely proud to have been involved in such a massively successful event:

“MIF17 really captured the spirit and imagination of Manchester perfectly and embraced so many remarkable locations, opening new perspectives to all working on the event and those enjoying it as members of the public.

“It was a truly awesome 18 days – and we loved every minute of it – the challenges, the brain-teasers, the chance to try new and distinctive designs and technical solutions. It was a pleasure working with Jack Thompson and his team and all the many talented artists, directors, creatives and producers who offered us the opportunities to help them deliver their work”.