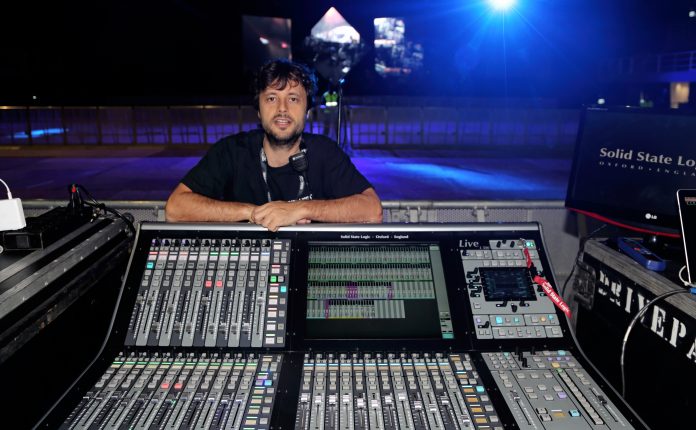 During his recent time out on the road mixing FOH for Brazilian super-group, Tribalistas, five-time GRAMMY-winner Dan Carvalho needed a flexible console that could not only deliver studio-quality sound to the stage but record the shows to the highest possible standard.

After discovering the SSL L500 Plus, he got hold of two for this tour – one for FOH, one for monitors – courtesy of Brazilian rental house, Gabisom. Carvalho’s relationship with Tribalistas goes back to when he was just starting out in the industry: at only 24, he helped the band with their first album recording; and 15 years later, got the call once more to record and co-produce album number two.

The fresh material inspired Tribalistas to tour their first album for the first time ever. “Because I’m a studio and a live guy, the L500 is the perfect fit for me and these Tribalistas shows, all of which we are recording,” he explained. “The first time I saw what SSL was doing on the live side was at Lollapalooza, where I was doing sound for a smaller band, and the headliner was using an L500. At the time, I didn’t know they even had a live console, but I stayed all day looking and listening to it, and it instantly became a dream of mine to work with one.” The Tribalistas tour has been huge, with the band filling out 45,000-capacity venues in Sao Paolo, and large arena runs in Rio, as well as a European leg before hitting US venues in February.

According to Carvalho, having the L500 in tow throughout was literally like taking a studio out on the road. “I’ve worked with SSL 9000s and 5000s in top studios in Rio, and you really do feel the same quality of sound coming from the L500 as those classic consoles, which I have found utterly amazing,” he said.

“I have recorded all the shows, and because we are playing to clicks and time codes, everything is pretty much in sync from show to show, which has allowed me to pick out the ambience of all the shows, and sum it together. That has been incredible, and the sound we have achieved by doing that is simply huge; this was all possible because of the SSL – it’s made my life so much easier out front, and has taken the Sonics to a whole other place; and having another on monitors has entirely changed the stage sound for the band – they picked up on it right away.

“Being my first tour with the SSL, I was learning how to use all the features of the console as I went, and at first, I didn’t use much of the delay or phase functionality, but by the last show, I was using it all,” he explained. “I used the All-Pass filter a lot – it’s great to compensate for overheads when you’re close mic’ing a tom, when you use it to adjust the phase it is simply incredible; you can apply way more low-end, as the overheads are not taking out the low of the close mics.

“The matrix is very easy to use, too. We are using two PAs: one for vocals, one for the band; and it was very easy to adapt the scenes for both and sum them together. Also, I love the SSL LMC compressor on drums, especially for parallel compression – in fact, every drummer that has heard the system has told me they’ve never have heard a snare sound like this one in a live application, ever. I give full credit to the SSL LMC compressor, and when I pulled up the mixes back home in the studio, the punch of the drums sounded even more incredible. This SSL is really something.

“I keep finding things! For example, I have recently discovered the incredible guitar cab emulator – that is very cool. On one song, the main guitar was never giving me the punch I needed, but the cabinet simulator really pushed it. I’ve also got really into the automation side of things: at that first show, it was just mutes; then I moved onto VCAs; then channels… But at the last show? Well, I could go to the bathroom, man!. Normally when you split signals, you lose a little bit of sound, so you push the gain, and it can get a little noisey, but the way we did gain sharing on the SSL made it very easy to use: all fibre, and no analogue multicores or splitter. It’s so much better to make a digital chain all the way to the amplifier, and it makes a phenomenal difference.”

Next year, Carvalho plans on taking the SSL L500 Plus out on another huge tour, which he says will be ‘way more rock and roll’: “It’s going to be a loud concert with big guitar solos, where the crowd shouts along to all the songs! So I really look forward to using the SSL on a proper rock tour, especially as I know how to operate everything!”