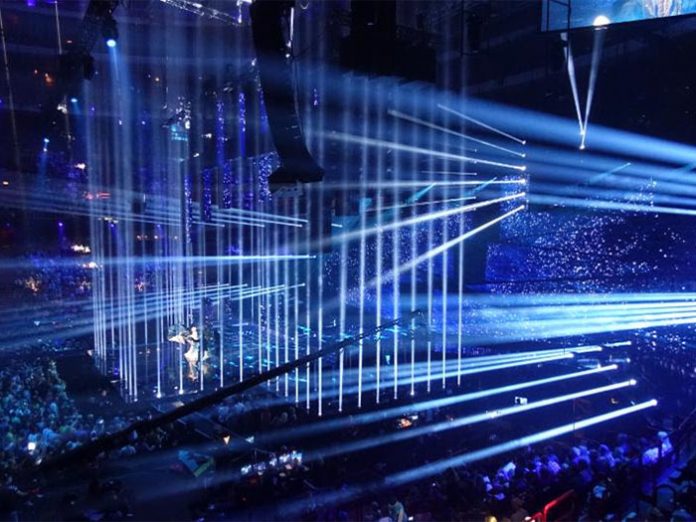 Fredrik Jönsson, Lighting Designer for the 61st edition of Europe’s biggest musical event, worked with Eurovision 2016 official technical supplier [LITE]COM to choose the AquaBeam after seeing it in action at the LDI Las Vegas show 2015.

“When I walked into the huge exhibition space the first thing I saw was a very defined red light beam shooting straight through the hall and up into the roof,” said Jönsson. “It’s rare to see a coloured beam with that level of brilliance its whole length. It appealed to me immediately as a potential gadget or special for this so I went straight over to the stand.”

The TourPro AquaBeams were supplied to [LITE]COM by Ampco Flashlight Sales, which handles European sales of the product.

“The first time we saw AquaBeam was during a fixture shootout at our production rehearsal studio ‘THE CUBE’,” said Girts Putelis of [LITE]COM. “Our whole team was highly impressed with the powerful beam. AquaBeam is a unique and successful combination of output, CMY colour mixing, compact size and IP-54 classification, making it ideal for the range of outdoor festivals we will be supplying technology to this summer. Our service department is also delighted by how reliable AquaBeam is – it was one of the most robust fixtures at Eurovision, which is a rigorous test for any fixture.”

Jönsson rigged a number of AquaBeams on 12 vertical pods around the stage to add another dimension to the angular lines of truss visible above the set. The rest of the fixtures worked as audience lighting 40 metres up in the Globe arena’s roof.

“Since we had a lot of beam fixtures in our rig, I chose the AquaBeam to add another texture of beam, one that was super bright and a different width to the others,” continues Jönsson. “They also produce very funky colours and have in-built prisms for some varying looks.”

The TourPro range offers a USP of superior design versus affordable price. The AquaBeam has an advanced colour system including colour wheel with six dichroic filters and linear CMY colour mixing.

“The AquaBeams also proved to be very reliable and performed fantastically across the three days of finals and the complete production period of more than a month before that,” said Jönsson.

Ola Melzig, Technical Director for Eurovision, added: “AquaBeam has proven to be very versatile, especially when giving an extreme punchy beam in combination with a very nice frost and it has the lowest failure rate compared to all the different fixture types we had within the production. We were extremely pleased.”