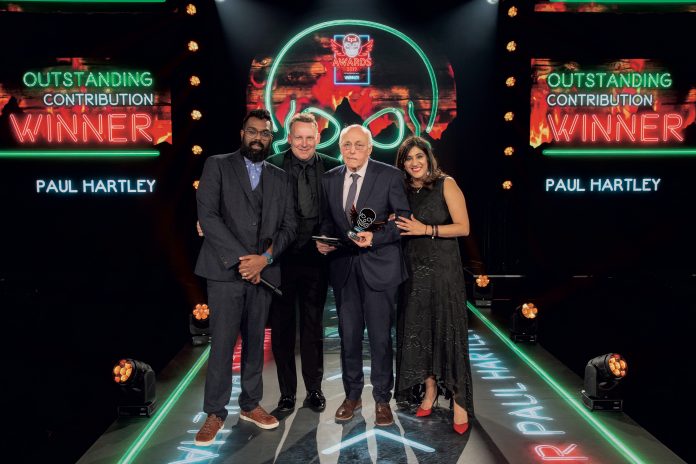 When did your passion for the live events industry first begin?

“Ever since woodwork classes at secondary school, I made a guitar with yellow with green spots. It didn’t work, of course, but it felt good to hold it. I later borrowed a set of drums and formed a band together with my old school chum, Gavin Sutherland.

“Early on in your career, you switched your drum sticks for flight cases becoming a roadie. What are some of your fondest memories from that time? Working as a roadie for The Sutherland Brothers was great. We embarked on many tours together notably the legendary Yellow Brick Road tour of the USA in 1974, a 40 city, six month tour which highlighted me holding up a Fender Rhodes piano with my back for Stevie Wonder so he could play a duet with Elton after the leg sheared off.”

You led the TMB UK crew for over 20 years. What are some of the biggest lesson you learned over that time about leadership?

“I’m really old school when it comes to this. I believe you should lead by example. I used to start work at 5.30am and worked through until 7.00pm, rarely stopping for lunch. I never asked anyone to do something I wouldn’t do myself. I always said thank you when someone did something they were asked to do. It’s also important to never promise something you can’t deliver. I always tell the truth and discuss issues immediately, don’t let them fester. Most importantly, if someone does something well give them a lot of praise!”

What were some of the greatest changes you saw within the industry following your appointment at TMB back in 1998?

“The industry has changed so much, the ‘show’ is bigger than the artist these days, making it challenging for the LDs to come up with something original that hasn’t been done before.LED has taken over despite many saying it would never catch on.”

You were recently honoured at this year’s TPi Awards with the Outstanding Contribution Award. How did you feel when your name was announced?

“Don’t trip on the steps going up for the award, firstly! I also had to try and talk slowly during my acceptance speech and thank my lovely wife of 40 years or else… In all seriousness, I’d like to send a huge thank you to all who have sent messages. I have been overwhelmed by the reaction to the award and humbled by your kind words.
I would like to leave a legacy and suggest The Paul Hartley Unsung Hero Award given to someone who has been around for years, known and respected by all.

“What advice do you have for the future generations hoping to follow in your footsteps? Remember that you are an essential part of a team who rely on you to ensure the show goes on. Adopt the three H’s. Be honest. Be hard working. Be humble.”