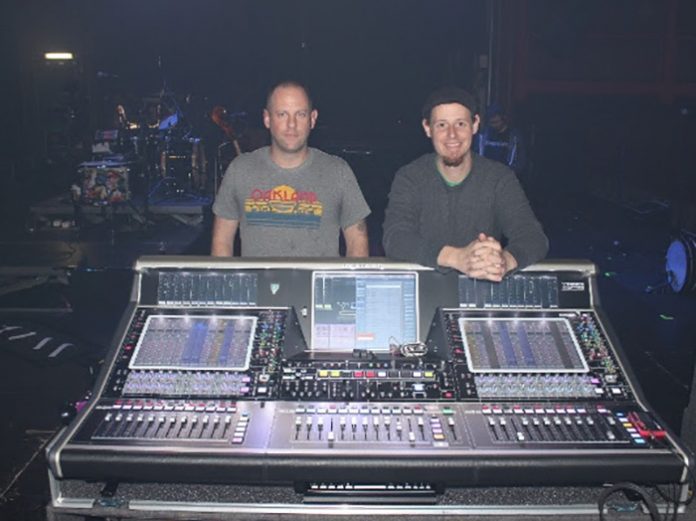 After their ‘difficult second album’ hit the number one spot in the UK, US, and Canada, you could say that The Lumineers have officially gone global with Cleopatra. The critically acclaimed, two-time Grammy-nominated folk trio from Colorado are currently selling out venues across the US and Europe, and they’re only going to get better. Keeping everything sweet at side of stage is Brad Galvin, mixing monitors on his trusted DiGiCo SD5.

The Lumineers are Wesley Schultz, Neyla Pekarek, and Jeremiah Caleb Fraites – and their music is making serious waves all over the globe. Playing intimate, fan-friendly venues has, said Galvin, been a real treat to witness.

“It’s a real breakthrough, as there’s always serious pressure with album number two, but they’ve knocked it out the park in my opinion, and the fans seem to love it,” commented Galvin, who first became acquainted with The Lumineers while working with the Dave Matthews Band in 2012. “I was the fly guy for Dave [Matthews], and I would also mix monitors for the opening acts; we did an arena run with The Lumineers opening up, and that was that when [their hit single] Ho Hey was really big. What struck me was that they were the only support act that attracted almost the entire audience when they went on.”

From there, a relationship formed, and by April 2013, Galvin was a permanent fixture on The Lumineers team as monitor engineer. He’s one of only two remaining crew members from that time, which speaks volumes; and when it comes to mixing, Brad’s console of choice is a DiGiCo SD5, provided by Sound Image in the US and SSE in Europe.

“My last console did a job for me, but when it comes to input count and scalability as far as I/O or outputs go, DiGiCo has to be my go-to,” he revealed. “You can also get DiGiCo boards anywhere around the world; and on top of that, if we do a TV show, maybe they can’t get me an SD5, but they can get me an SD8, or an SD10. It’s so easy to move between those consoles, as you can just take your show file and use it on any other console in the range. It’s the same core engine. I just use the SD Convert software, and tell it what console it’s going to.”

The Lumineers are very into their reverbs, Galvin explained, which was hard for him at the start, as there were so many audience microphones to deal with but, by using the internal effects within the console, everything is now running very smoothly.

“The sound quality of the effects from within the DiGiCo console means I need zero outboard gear: I have 16 reverbs running, and there are no issues at all. The show itself is 72 inputs, but my show file is probably 98 with all the reverb returns and everything else. We expected it to be 56, so to make the jump to 72 is pretty exciting, and DiGiCo allows me to do that; the I/O really is a very big deal.”

And translating the sound of the new record onto the live stage has been a lot of fun: “It literally sounds like the album, so I even impress myself sometimes,” he laughed. “We’ve been playing intimate settings such as Manchester’s Albert Hall and The Olympia in Dublin, which makes it tough on the one hand, as we have a full semi of production, but the band loves it, so it’s way more enjoyable for them!”