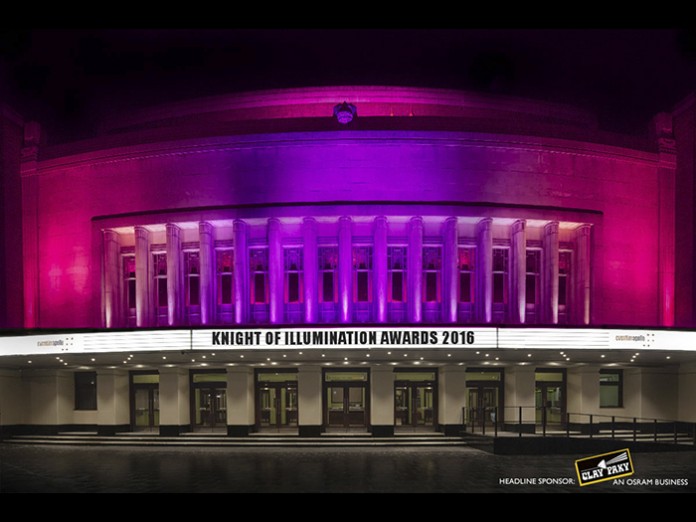 The Knight of Illumination Awards (KOI) 2016 has announced that this year’s industry-anticipated ceremony will now take place at major live entertainment venue the Eventim Apollo, Hammersmith on the 18th September.

“Eventim Apollo is renowned for celebrating world-class talent of all kinds, so we’re thrilled to be hosting the Knight of Illumination Awards 2016, which champion the exceptional work of the world’s leading lighting designers,” said Sarah Myring, Eventim Apollo FOH and Corporate Sales Manager. “It’s also fitting that so many of the designers have themselves worked on shows at the iconic venue, which has recently undergone an overhaul with colour wash LED lighting to create a truly state of the art lighting system. This is an excellent opportunity to recognise the talented community of lighting designers that have come through our doors over the years, and we’re delighted to be hosting the awards in our unique event space.”

The event has also confirmed its headline sponsor as Italian lighting manufacturer Clay Paky, the company that originally founded and managed the Awards before KOI developed into the pan-industry event it is today.

“We are delighted that the event that Clay Paky started nearly a decade ago is today sponsored and supported by almost all of the major businesses operating in entertainment lighting and video technology,” said Pio Nahum, CEO of Clay Paky. “Knight of Illumination Awards is one of the most prestigious events on the lighting and video and content design calendar and the event brings together the very best in their field. The mission is, and always has been, to celebrate the remarkable creativity and excellence of lighting and video content designers, so we are extremely proud to continue to support the Awards as Headline Sponsor.”

This year marks the ninth edition of the Awards, which celebrates the creative talents of international lighting and digital content designers working in the UK in the sectors of TV, Theatre and Concert Touring and Events.

“We’re very happy to be a sponsor of the Knight of Illumination Awards 2016,” says Lee Spencer, Commercial Director of PRG XL Video, the first company to sponsor this year’s awards. “This is the fourth year we have been involved, and during that time we’ve seen the Awards grow in prominence in our industry. The event is always an excellent opportunity to meet with the very best lighting and video designers in our sector, and to celebrate their work!”

Submissions are currently open for the Television and Concert Touring and Events categories and shows performed or broadcast between 1st August 2015 and 31st July 2016 in the UK are eligible. As with previous years the Theatre section can only be nominated by the judging panel.

Submissions can be made for TV and Concert Touring by visiting the KOI website. The shortlists will be announced in late August. A panel of industry experts from each sector assess each and every entry for each of the awards.

In addition, The Enrico Caironi Lifetime Recognition Award will be presented to an individual whose passion for the industry has gone above and beyond the call of duty, in turn benefiting their colleagues, the industry and the wider world.

The KOI Awards was conceived and is organised by Durham and Jennie Marenghi and prestigious industry organisations the STLD (Society of Television Lighting and Design), the ALD (Association of Lighting Designers) and content creation, communication and events agency The Fifth Estate Ltd, which produces and manages the event itself and handles KOI’s marketing and PR.

To find out more about the sectors and subcategories or information on how you can submit an entry for television or concert touring and event lighting and visual content please visit www.knight-of-illumination.com/categories.