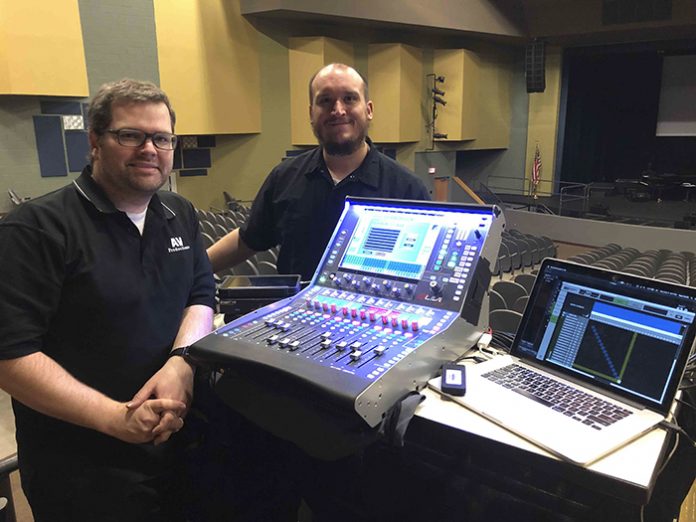 The Gentlemen Trio, a dynamic group of three tenors, performs their signature “Cinematic Pop” to a wide variety of audiences and venues. Using a compact Allen & Heath dLive C1500 Surface and CDM32 MixRack at FOH and two IP8 Remote Controllers at monitors all supplied by Performance Audio in Salt Lake City, Utah.

Outside of the group’s Utah home base, most performances are ﬂy dates and FOH Engineer Ryan Smith said, “With the exception of racks and stacks, we ﬂy with everything.” Given the requirement of portability, and the need to mix and control a complex show, Smith and Production Manager Doug Olsen chose the Allen & Heath dLive. “We really couldn’t do this with any other system because they weren’t scalable like the dLive. Now we’ve got a powerful system that ﬁts in ﬂy cases and it’s all running at 96kHz.”

GENTRI’s system includes a pair of laptops which connect to the dLive through a Waves card. One allows multitrack recording while the other receives audio tracks from Figure 53’s QLab software. Smith mixes the group’s wireless mics and runs Shure’s Wireless Workbench via the dLive’s Shure integration. Although most performances use fewer than 20 sources, Smith rents an Allen & Heath DX168 Expander for larger shows which may include a small orchestra or string quintet.

In keeping with the goal of ﬂyability, Smith and Olsen designed a monitoring system using a pair of Allen & Heath IP8 Remote Controllers that mix the group’s in-ear monitors. One IP8, on stage, has a layer for each member of the trio and for composer and pianist Stephen Nelson. “It’s very discreet,” said Smith. “They just walk up to the IP8, select their layer and adjust their mix.” The second IP8, at FOH, mirrors the ﬁrst allowing Production Manager Olsen to listen to and adjust each performer’s mix as needed.

For a big Christmas show last year, Smith brought in a dLive C3500 Surface at FOH and repurposed the C1500 for monitors. “It was super simple to set up,” he said. “Once you get your workﬂow ﬁgured out, the dLive is very intuitive.” Smith added, “The dLive’s sound is very transparent. And that’s important to us because a lot of the GENTRI songs are just an acoustic piano and the three tenor voices and it can be very dynamic. But, with the dLive, from their quiet songs up to their more operatic stuﬀ.”