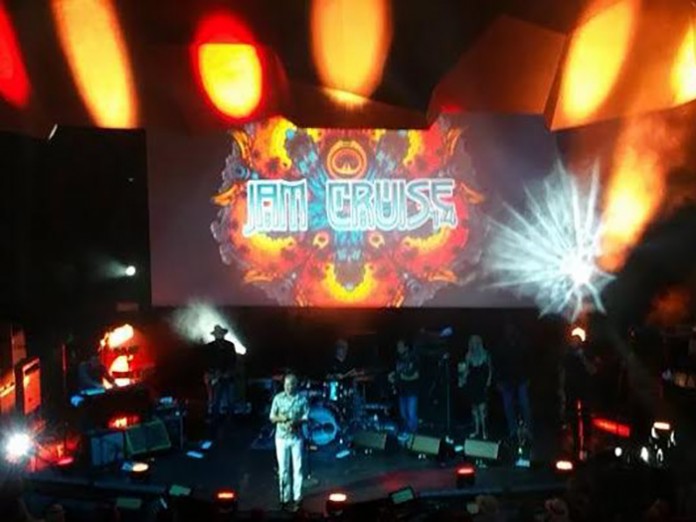 When Abbas Ritscher set sail from Miami on Jam Cruise 14, he paid a little extra attention to the weather charts. “Every time we leave port, the captain always jokes that we ‘expect the weather,’” said the co-owner of The Design Oasis, who has served as the video designer on the popular seaborne music festival for the past five years. “On the previous cruise we got winds that were strong enough to force the cancelation of the night’s last act.”
Ritscher’s experience gave him a renewed appreciation for the rugged durability of his Chauvet Professional MVP LED video panels. “When I checked out my video wall the morning after the high winds, they were 100 percent fine,” he said. “The Chauvet panels have enough transparency to allow the wind to pass through. Of course we also divided our wall into sections to account for winds, but these panels are very reliable workhorses.”

This year the weather was picture perfect for the Jam Cruise aboard the MSC Divina (named in honor of ionic actress Sophia Loren), which left Ritscher time to appreciate other qualities of his video rig, beyond its durability. “We really created some great looks on the main stage and throughout the ship with the panels,” he said. The panels provided an intense backdrop to a variety of acts for five days without ever repeating themselves or getting stale.”

Ritscher said: “Our video wall was 10ft by 20ft and divided into three sections. We displayed the same images on all three sections. Breaking up the images up this way created some nice added depth to the stage.”

He showed IMAG video of the performing artists on the wall and wove them around breakout pattern displays: “We went from camera feeds to our nice psychedelic images. We worked with patterns we purchased, added in effects and layered them. The whole idea was to use the video wall to add depth to dimensionality to the stage.”

In addition to creating the tri-sectioned video wall behind the stage, Ritscher used individual MVP video panels to ring the main audience area on deck.  Attached to the upper deck railings overlooking the crowd, the panels were used to display images as well as to saturate the audience with color.
“The panels are very bright so we definitely could use them for audience lighting and colorising,” said Ritscher. “We even used them as strobes on Jam Cruise. When these panels aren’t being used for video, you can have them serve as a lighting fixture. When you’re at sea, you can’t run out and add new fixtures on the spur of the moment, so you appreciate the versatility – not to mention the ruggedness of these panels.”