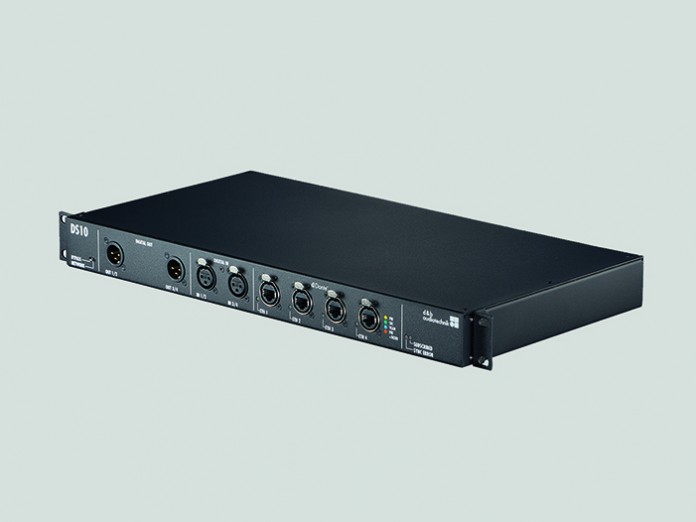 Using the DS10, multiple channels can be sent from the console to the amplifiers using a single network cable. At the amplifiers, the DS10 distributes the audio signals to the AES3 inputs within the d&b amplifiers. The DS10 sends meta data information, such as Dante channel labels and cabling information via the AES3 channel stream to the latest generation of d&b amplifiers for simplified routing and troubleshooting.

The DS10 is more than just an interface between the Dante audio transport protocol and the d&b amplifiers. Four AES3 input channels enable use as a Dante break-in from a Front of House console. Additionally, the DS10 offers a ‘Bypass’ mode, which allows operation as an AES3 splitter, directly distributing the four AES3 input channels to all AES3 outputs.
The wide range power supply is suitable for mains voltages 100 – 240V, 50 – 60 Hz, and features Overvoltage protection of up to 400V.

The DS10 features an integrated five port switch, with options for a primary and redundant network, as well as further connectivity for external devices such as a laptop to access the d&b Remote network and control amplifiers using the d&b R1 remote control software.

The DS10 can transport both audio and remote control data via the same network cable. All four channel d&b amplifiers [the D80, D20, 30D and 10D] can be controlled via Ethernet using the Open Control Architecture protocol (OCA), providing a high bandwidth and a quick response time for fast and accurate adjustment. These four channel amplifiers provide comprehensive Digital Signal Processing capabilities including two 16-band equalisers and up to 10 seconds of delay for each channel, as well as setups for d&b loudspeakers.

“d&b is now even further up the signal chain, straight from the console with all the signal processing carried out within the d&b amplifiers. Remote control data and audio can now be sent to the d&b amplifiers via the DS10, which guarantees simplicity in operation and flexibility in use“, explained Vicent Perales, d&b Product Manager.

“This flexible one RU device really opens up the functionality of the d&b amplifiers, and enables seamless interoperability of Dante enabled devices with d&b systems.”