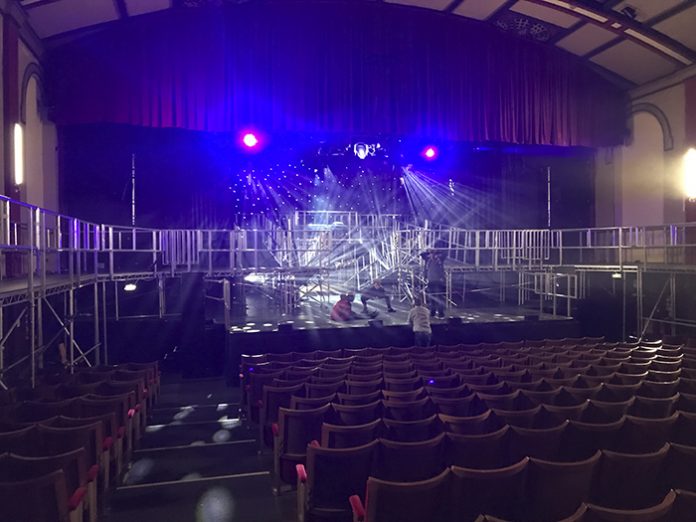 Thacker is Orbital Sound’s Head of Education, commissioned to creatively design and facilitate the audio systems for a production of Starlight Express by the Coventry Youth Operetta Group. The assignment was a challenging one. The 65 young artistes of the YOG, many of them wearing radio mics, would be performing on roller-skates, dancing and singing on a track that encircled the stalls of the Albany Theatre. “Yes, right in front of the PA,” explained Thacker.  “My main concern was whether we would be able to get enough gain before feedback.”

The one-man audio crew took just 90 minutes to load in and rig the main PA, groundstacks of 4x GEO M10 cabinets, on top of 3 Nexo GEO M15 subs. At front-of-house, Thacker was using a Yamaha CL5 digital console and Rio3224-D2 I/O rack units, running a Dante audio network. Frontfill was provided by Nexo’s super-compact ID24 speakers, and there were a number of PS Series cabinets on stage for foldback.

“Setting up the GEO M10 line array was very simple. I was surprised at how quickly I was able to fit it up and leave myself time to concentrate on the mix. Actually, there were no problems at all with feedback. The Nexo PA is so nicely focussed that all I had to do was point the boxes into the auditorium where the sound was needed, and use a little bit of EQ. No requirement for delay or extra speakers around the theatre. The snap-on horn flanges are a great asset; being able to instantly change the horizontal dispersion between 80 and 120 degrees without having to use a different cabinet is a real-life USP.”

In-house technicians at the Albany Theatre were noticeably impressed by the sound coverage achieved for the seats in the circle, usually a problem area for the venue, but easily reached by the top module in the Nexo GEO M10 groundstack.

“The 22 radio mic inputs plugged into the Rio, and everything, including the amplifiers, was controllable from front-of-house, where I was using Nexo’s remote control software, NeMo on iPad and OSX.  The whole system was running off a NXAMP4x1Mk2 and a NXAMP4x4, and needing only two amplifiers was a big plus, considering there was so little space in the theatre.

“I was particularly impressed by the power in Nexo’s M15 subs, ideal for a small musical production that has rock AND roll!  The sound quality was fantastic, and, speaking as an operator, it was pleasing to have the Nexo and Yamaha systems working together very, very well.”