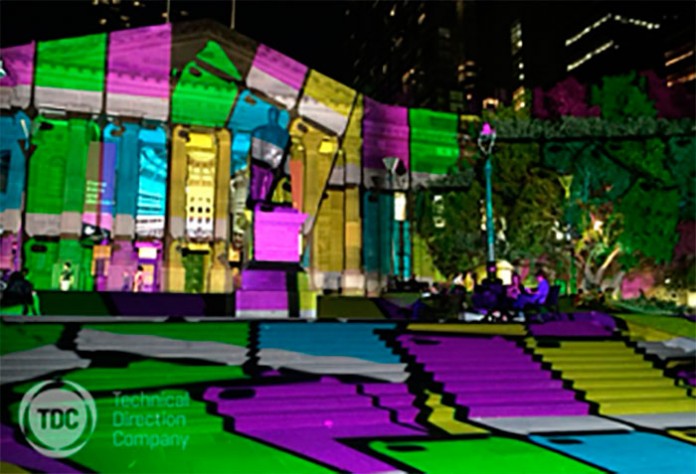 On 20 February at White Night Melbourne 2016, TDC – Technical Direction Company achieved a projection mapping first inside La Trobe Reading Room of The State Library of Victoria. On the façade of the Library building itself, TDC immersed audiences in a myriad of illuminated video projections.

Melbourne is one of seven UNESCO Cities of Literature, which inspired a group of Australian Artists – Nick Azidis, Lisa Greenaway, Adem Jaffers and Bentley Dean – to create Ideation, as a spectacular audio-visual celebration of the power of libraries to teach, inspire and develop knowledge. The Library’s majestic La Trobe Reading Room is an octagonal 1,000 metre-wide learning space under a 35-metre high-dome. When it was opened in 1913 it was the largest of its kind in the world.

Ideation at White Night Melbourne 2016 paid tribute to this important room by giving it a virtual makeover in the form of illuminated 360-degree artwork. Steve Cain, head technician at TDC, said: “It was a very challenging and complex room to line up each video projector and image.”

The team at TDC created a projection area that was 120 metres wide by 30 metres high with a full 360° blend. High-resolution content was rendered at 8K wide and 2.5K high creating a single image at an amazing 20,000 pixels.

“The size of the image allowed us to do true pixel lock on all server outputs through to projection, making for the sharpest and best possible image,” added Cain. “To achieve this, I made good use of the pre-visualisation tool and footprint features of our d3 4x4pro servers to come up with the best design concept as well as to use every pixel and projector brightness as efficiently as possible.“

“An additional challenge to overcome was achieving pixel perfect blending and focus over building surface curves, balconies that protrude several metres forward and alcoves recessing back several metres, side-by-side. Although this was a challenge, it’s one that we knew how to overcome after many years of mastering different building architectures with projection mapping.”

“To create the video projections this year we used our d3 4x4pro media servers running new VFC output cards as well as play out of fully immersive surround sound, integrated with high-resolution Barco HDF-W26 large-format projectors. It was a great project to do, very cool, and I loved it,” enthused Cain.

In front of a large forecourt and lawns filled to capacity with White Night revellers, TDC provided video projection using the State Library façade, forecourt grass, steps and trees as a canvas. All up, the projection area was 80 metres wide by 24 metres high.

“For the exterior, we used more of our Barco HDF-W26 high-brightness projectors and integrated them with Christie Pandora’s Box media servers for playback,” added Pete Lynn, technical project manager at TDC.

“The Artists used video to explore the Library as an ecosystem of imagination and the driving energy for knowledge. By doing this project, TDC, working with Amanda Morgan, James HH Morgan and DJ JNETT, attempted to show the inspiring process of human learning.”