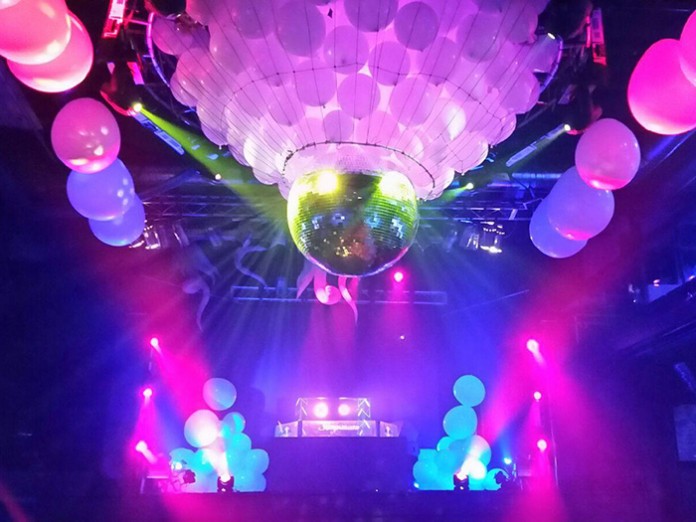 Revellers coming to the Amphitheatre seeking an immersive experience on New Year’s Eve found what they were looking for at the lofty two-story club, which has become a familiar stop on the EDM circuit.

Adding to the atmosphere was a sea of overhead balloons colorised by a collection of COLORado and COLORdash fixtures from Chauvet Professional.

Lighting Designer Brett Lorins of Brett Lorins Design brought the Chauvet fixtures to the high profile club just for NYE at the behest of his friend, Amphitheatre LD Rick Sheppard. “It was something that Rick and the club’s owners had discussed,” said Lorins. “In previous years they did balloon drops, but they wanted to take it a step further this year and make the display more engrossing.”

Rather than simply have any old balloons, Lorins and Sheppard decided to colorise the inflatables with light. This is where the COLORados and COLORdashes came into play. “The Chauvet fixtures were brought in specifically to light the balloons, because of their intense colour output and brightness,” he commented. The animated clock on the big building counted down as 2015 came to an end. A large crowd gathered in the streets to watch the glistening ball drop to welcome the new year.

Being LED fixtures, the COLORados and COLORdashes also helped the LD’s deal with power draw issues. The Amphitheatre is located in Ybor City, a section of Tampa built in the 1880s to house cigar factories. Now a popular nightlife neighbourhood, the neighbourhood has been officially designated a historic preservation district, meaning that it is difficult, if not impossible, to add power.

The fixtures that Lorins brought to the club on New Year’s Eve included six COLORado1-Tri Tour RGB washes, four COLORdash Par Quad 7 RGBA par style units and one COLORado 3 RGB wash bank. This collection of fixtures was used to colorise 500 balloons that were housed in a conical circular overhead truss structure. Measuring 20-feet in diameter, the truss coned down to a 52-inch opening. A 48-inch mirror ball served as a glittering cork, keeping the balloons in the structure.

“Before midnight we used the COLORado 1-Tri Tours and the COLORdashes to light up the balloons inside the truss structure,” Lorins said. “We positioned the fixtures strategically so the coloured light really sparkled in every direction from the sea of balloons. Being white, the balloons really took on the colour of the light beautifully.”

At precisely 9:59:50, the mirror ball was dropped. It took roughly ten seconds for the first balloon to be liberated from the conical structure. Gradually as more balloons left the structure, the outpouring accelerated until there was an avalanche of hundreds of balloons descending on the dance floor.

Prior to the release of the first balloon, the COLORado 1-Tri Tour and COLORdash fixtures were turned off. The only light hitting the balloons as they left the structure was the output of the COLORado 3, positioned 30-feet in the air facing the conical truss. The light from the RGB wash bank illuminating the white balloons against a darkened background created a powerful visual image. “It required some creative rigging and manoeuvring to position the COLORado bank fixtures,” he added, “but it was well worth the effort.”

The COLORado 1-Tri Tours and the COLORdash fixtures did double duty at the club. After the balloons dropped, the fixtures were repositioned to bathe the performing DJs in rich arrays of colours. “We really liked the tight beams of the COLORdashes when we used them to illuminate the DJ stand,” he said.