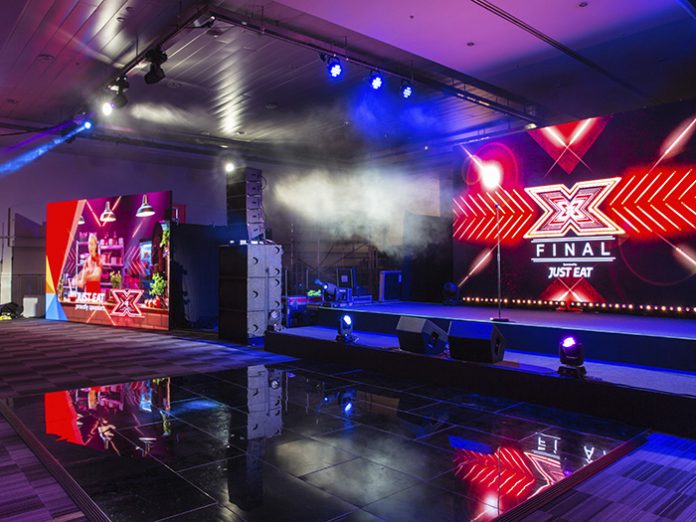 In December 2017, SXS Events provided the technical aspects for the official X Factor VIP after party as appointed by experiential agency, Experience. The longstanding events company was in charge of creating a backstage style experience while sticking to the designs and format of the main television show.

SXS provided audio, lighting, rigging and LED video walls for the Exclusive event held at London’s Excel centre. Throughout the evening guests were immersed in a full wardrobe, makeup and photo shoot experience before heading to the main stage for performances from previous X Factor contestants. A Sennheiser MMK-965 was the mic capsule of choice for the evening which George Shelley used to present the party and later used by X Factor 2017 winners, RAK-SU. The front of house audio seamlessly ran through a Martin Audio system consisting of W8LM line array, W8LMD downfill plus WS21148X 18” dual subs while in ear mixing was monitored with the Sennheiser EW300 G3.

The lighting rig was controlled via an Avolites Tiger Touch Pro console and included Elation Professional Platinum 5R Beams plus Chauvet Professional Rogue R1’s & 2’s. SXS recently invested in the small but mighty Yamaha QL1 with Dante Rio Rack from Leisuretec, which was also deployed front of house for the VIP party. Senior Project Handler, Nathan Dunbar commented: “The QL1 has incredible processing power and the Dante networking system makes it a game changer in small format mixers. The built-in effects and automixer mean it’s a stand out product in our fleet of rental equipment.”

SXS Events have been customers of Leisuretec for a number of years due to “amazing customer support and turnaround time,” Dunbar said. He concluded: “We often need products delivered within 24 hours of order and Leisuretec have gone above and beyond to fulfil our requirements – even delivery to site!”