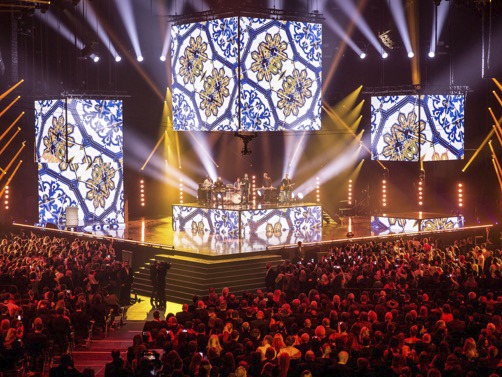 Gerdon, who lit the awards show for the first time, worked together with associate LD Evers. Gerdon and the design team, which included stage designer Timo Martens from HELL Studio and content designer Roger Staub, were entrusted with creating a great atmosphere in the arena. Production company Habegger was responsible for the lighting, sound and all the technical for the show and provided the Elation gear for the event.

The main visual element of the set design were large scenic video cubes that gave the set both height and depth and were used to colour the space in dynamic graphics as well as uniform looks of colour. Positioned in the largest scenic cube directly above centre stage were 20 ACL 360 Matrix fixtures that Gerdon used for a variety of purposes. He explained, “We pixel mapped all the ACL 360 Matrix fixtures, so we used them for pixel mapping effects. We also used them as generic wash lights in some songs and in other songs as a back light. So, they really had a lot of jobs and they worked really well.” Using 25 individual 15W RGBW LEDs and with a tight 4° beam from each lens, the fixture’s continuous 360° movement and individual pixel control make a variety of dynamic effects possible.

A hybrid of possibilities

Gerdon, who values multi-functional fixtures and the many options they open up, used 12 Platinum FLX fixtures on the awards show and calls them the best hybrid on the market. He is well familiar with their multi-functional abilities, having used them along with Elation’s mid-sized Platinum HFX hybrid fixture to light German television program Verstehen Sie Spass last fall. “In my point of view, the FLX is better than other hybrids,” he spoke of the spot/beam/wash light with 470W lamp and 20,000 lumens of power. “In terms of brightness and colour mixing, it is one step beyond.”

Flexible intelligent fixtures, especially intelligent hybrid fixtures, are especially suited to customising looks on variety format shows like the many different types of artists that performed on the Swiss Music Awards. “We had the chance to create a lot of different looks in one show,” Gerdon stated. “There were young artists and old acts, up-tempo techno and rock songs to slower numbers, so for some songs we used lots of colour and effects while on others only white light.” He explained that an artist’s management has some input in terms of colour, tempo, etc. but that they generally give him an idea of the visual design, which he then makes tweaks to, after rehearsals. “But with only three days from pre-programming to show the schedule is tight.”

Also, used on the show were 12 Platinum HFX, a mid-sized spot/ beam/wash moving head with the same intelligent optical system as the award-winning Platinum FLX. The FLX and HFX were positioned on two vertical trusses each side of the stage – 12 total on each side – with the FLX working from the outer truss. The hybrid modes of both fixtures were used throughout the show from backlight washes of colour to big beam barrages to big gobo looks.

Gerdon used Elation’s Fuze series on the fall Verstehen Sie Spass show in the form of the Fuze Wash Z120 moving head and this time turned to the larger Fuze Wash Z350. “It looks so much like a traditional moving head wash you would think there were VLs in the rig!” he exclaimed of the single source PAR moving head. “I really like the idea of this fixture and it’s something I’ve wanted for years.”

The Fuze Wash Z350 houses a 350W RGBW COB LED engine with zoom and has a lens face that appears as one colour for more classic wash looks from an LED light. Gerdon had 24 of them zoomed out on a back line horizontal truss to cover black holes on the stage and project beams from above. “There is no other LED with a single lens look where the LED appears as a wash on camera,” he said. “There is nothing else on the market like it and just that makes it interesting. It has really good colour and the zoom in it is really nice. This fixture brings the basics and does it nicely.” Gerdon also used them in white light for an incandescent look. Broadcast live on the SRF network as well as live-streamed on RSI.ch to a broad public, Gerdon stated that the fixtures “behaved on camera with no flicker.”