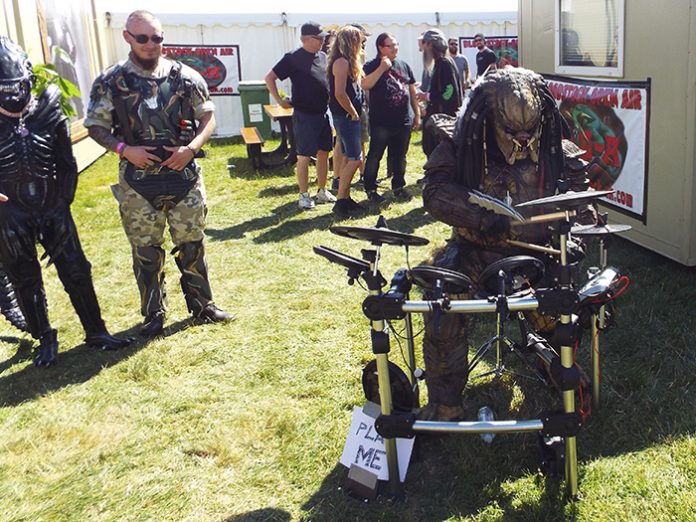 Studiomaster and Carlsbro kit was in use widely across the site of the UK’s biggest metal festival during the four-day, four-stage event at Catton Park in Derbyshire in August. The company last supplied equipment as a sponsor to Bloodstock Open Air in 2014.

The Hobgoblin New Blood Stage featured an array of Carlsbro backline, with assorted EVO tube heads and four by 12 cabs for guitars, and Viper heads, with four by 10 and one by 15 cabs, for bass.

The Hobgoblin New Blood Stage hosted almost 40 bands over the four-day event. The stage area in the Serpent’s Lair VIP bar was powered by a 4K Studiomaster PA – featuring some of the latest Studiomaster self-powered cabs – while Carlsbro CSD130 electronic drum kits were scattered throughout the bar. These were given away as competition prizes on the final day of the festival.

Backstage at the main Ronnie James Dio Stage, the dressing room area featured ‘practice stations’ with various Carlsbro amps and electronic drum kits for bands warming up for, or winding down from, their onstage performance. The Studiomaster/Carlsbro team were also on hand to provide technical support.

Speaking immediately after the event, Studiomaster/Carlsbro General Manager Patrick Almond said: “It’s great to be back at Bloodstock Open Air. We missed it last year, due to our just being too busy to cater for it, but I vowed we wouldn’t miss it this year, or ever again.”