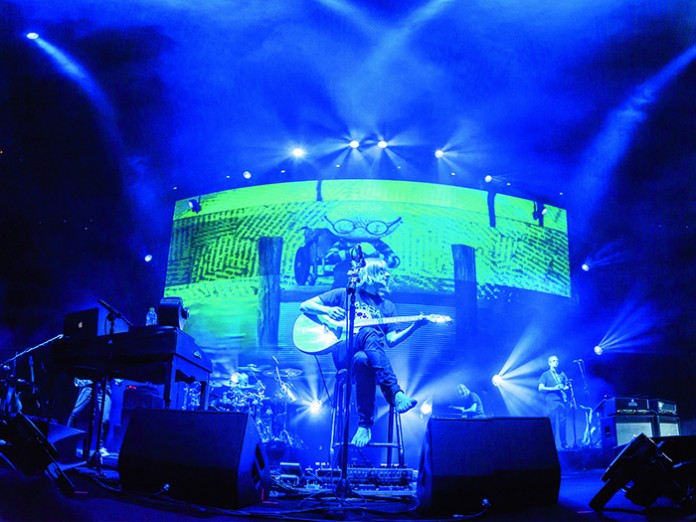 After a busy year of touring, Steven Wilson concluded his 2015 live dates with two nights at the Royal Albert Hall. Once again Hawthorn supplied lighting and video to bring the prog star’s music to life.

Steven Wilson has had a very successful year. Since the release of his fourth solo studio album, Hand. Cannot. Erase., the British musician has toured the world, treating fans to a fully immersive musical experience including tailor-made video content that was played throughout every single show.

The set on the first night of the Royal Albert Hall show was almost identical to the rest of the Hand. Cannot. Erase. tour, while the second night was geared more towards fans of Wilson’s whole career – where he and his band played through a back catalogue including several songs from his former band, Porcupine Tree.

Before the tour began earlier this year, Wilson’s hope was to create a show that would raise the bar both musically and visually from any of the previous tours he had put together. Raising the bar in this case meant having bespoke films created that were played throughout every performance.

To make this ambitious project come to life, Matthew Jensen was assigned the job as Lighting Designer. Speaking with Jensen after the Albert Hall event he recalled his experience with the tour. “I have been with Steven since earlier last year,” he said. “It’s been great to work with Steven because he has such a distinct vision for his show.”

Jensen decided that the best way forward for the tour was to work with Hawthorn, who supplied lighting and video for the tour. “Video definitely came first when deciding to go with Hawthorn,” he explained. “I have never personally worked with Hawthorn but I have known Mick Freer [Concert Touring Manager at Hawthorn] for a long time. I was impressed with what Hawthorn had to offer in terms of LED solutions.”

Jensen decided to use the Glux 10mm screens for the tour, which provided a canvas for the various films that are played throughout the show. He explained: “The whole show itself is time sequenced, which is vital due to many frame-specific moments where the video has to tie-in exactly with the music. Obviously having a large LED screen is a large investment but it certainly made an impact.”

This is not the first time that Hawthorn has supplied services to Steven Wilson. It first supplied a small lighting package for Wilson’s European jaunt in April 2012. Mick Freer of Hawthorn spoke about its involvement with the 2012 tour: “During that tour we got to know Dave Salt, Wilson’s Tour Manager. When I saw the recent dates of Steven’s tour I got in touch with Dave to see if we could be of service.” After this, Freer was put in touch with Jensen who he was already firm friends with: “We brought him up to Leicestershire to our head office and demonstrated a whole range of equipment including our LED wall. Originally the production team behind Steven Wilson was thinking of using projections for the tour. But when I showed Jensen the Glux video he began to change his mind. The product is semi-transparent which means you can put lights behind it, which Jensen did using Clay Paky A.leda, B-EYE, and K10’s.”

Jensen went on to state that the ground support system for the screen, that was also supplied by Hawthorn, was one of the clinchers of the deal. “It had a very small footprint and it allowed me to guarantee management that we could use the screen in every venue on the tour which, given the cost of the screen, helped to convince them to allow us to take the production up a level. We have done some very small venues on this tour but we have always managed to get the screen in.”

Jensen spoke about his experience with the Royal Albert Hall shows: “The height of the Albert Hall is always the issue, not to mention the height that people sit at. We had to ensure that we didn’t shine anything into the audience’s eyes at the side of the stage. On the floor under the screen, we swapped the SGM P5 LEDs for James Thomas Engineering Pixel Lines. The Pixel Lines have a tighter beam so it didn’t dazzle the audience in the higher seats. The remaining P5’s were used as audience blinders. Also added for the shows were two side trusses with four Clay Paky Alpha Spots QWO 800 on each. These gave some sidelight as well as beamage to fill the width of the venue.”

Freer added: “The video wall we supplied for the Albert Hall was much bigger. A 13 by 7.5 metre screen to be exact. Wilson wanted to get the biggest wall he could. This meant that we had to swap screens and bring in the Glux 12mm.” Daniel Oswald, Lighting and Screen Technician for both the tour and the Albert Hall performance, spoke about his experience using the Glux product: “I had never actually used the Glux Screen before. It is very user-friendly for touring. I could build the whole screen in about half an hour during the tour. The Royal Albert Hall we had to use a slightly different product with the 12mm screen. The panel connected together in a slightly different configuration as they have an internal locking mechanism.”

As well as a bigger screen, the larger scale of the Royal Albert Hall allowed Jensen to really play around with some ideas that had developed through the tour. Throughout the year the Lighting Designer had developed a design that resembled the top part of an eye. For the Royal Albert Hall, with its larger scale, Jensen and his team were able to expand this concept so the whole lighting design gave the appearance of an eye. Another piece of the live tour that made a welcome return to the Royal Albert Hall performance was the White Gauze Kabuki drape that fell in front of the band and acted as a semi transparent projection screen that the band played behind.

To close Freer wanted to express on behalf of Hawthorn that: “It has been a great pleasure to work with Steven Wilson and be part of such a beautiful design. We had a great working relationship with the production team and are really looking forward to working with them once again on next year’s tour.”

KAGE KRANKks it up at Pukkelpop 2022 with Pioneer Pro Audio