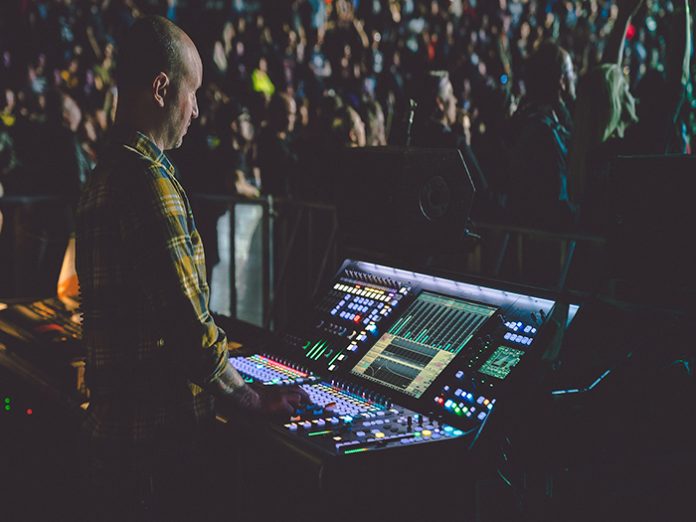 Avenged Sevenfold has been busy with its latest world arena tour, following the release of the group’s most recent album, The Stage. Front of House engineer Bob Strakele – also known for his work with The War on Drugs, Awolnation, Papa Roach, and James – has been with them at every stop, and chose the Solid State Logic L500 Plus live console for mixing duties, supplied by Solotech.

Strakele had around 48 inputs from stage, with 23 of those accounted for on the drum kit. The rest of the set include bass, 2 electric guitars, 2 acoustics, plus 5 vocal mics. Strakele, said: “With double kick drums and blazing fast songs, it might be hard to keep it punchy – keep it together. So, I’m using a lot of EQ to make things pop out, though the SSL EQ is amazingly musical and to me it doesn’t sound ‘EQ’d’, even with some wild curves.

“I’ve always been a studio engineer and a live engineer, so the Stem Group was a game-changer for me. I can funnel several things into one stem, process it the way I want to, then send it somewhere else and process it further. This allows me to do what I do in the studio with a patchbay, inside the console.”

For Avenged Sevenfold, Strakele mixes all 4 microphones on the 2 kick drums from their input channels into a single Stem Group. “I do the same with the Toms,” he continued, “and the same with the overheads. Then I send those three Stems into two further Stems – a dry drum group and a crushed parallel group that I use an old outboard compressor on. The Bass uses 3 inputs: clean, dirty, and amp, and again I mix them all to a single stem so I can EQ and compress them as one.”

With this hierarchical routing through the stems of the SSL L500, Strakele can make creative choices about gain structure and drive through the console architecture in real time during the show. “Depending on what I’m trying to accomplish, I’m either controlling the Stem with a VCA or I’m controlling the channels with a VCA and driving into the Stem.

“If I’m controlling the channels, the more I push the VCA, the harder it hits the Stem, and the Stem processing will react differently. On an aggressive song, for example, it means I can push into the stem compressor harder and add a lot of excitement at the right times without getting louder; or for slower songs I can back off and mix with the Stems… it allows me to have more dynamics without getting too far into automation or changing the way I’m processing the channels.”

Aside from a couple of very particular outboard rack units, Strakele mostly uses the console’s internal FX rack for additional processing, including his main reverbs. The SSL L500 has a capacity of up to 96 FX instances chosen from a range of around 50 algorithms. “On my return layer I mix manually for whatever I’m feeling at the time… There are a couple of occasional ‘big hits’ that I set up on Auxes and then open using the console’s user defined keys.”

He assigns the user keys to tempo taps and to mute/unmutes for ‘zeroed’ effects returns. In this way he can catch a single word, part of a word, or a single drum hit with an additional effect. “It’s the part of the day I look forward to the most,” he continued. “I don’t want to just sit there and press ‘next’ for each song. Avenged Sevenfold is a rock band, so my job is to make it as exciting and as dynamic as I can. The way I’m using the console allows me to make it dynamic – even it’s simply a change in the tonality.”