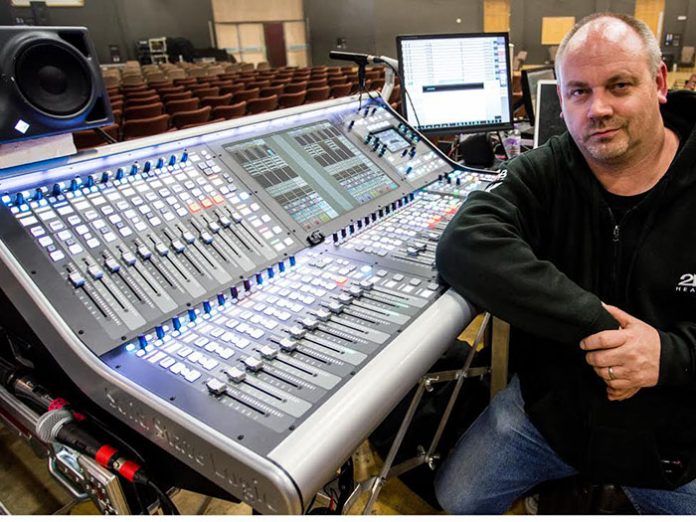 Leona Lewis has been on a 14-date tour of the UK with an SSL L500 console and K-array Slim Array technology, chosen by celebrated FOH Engineer Dave Wooster.

Lewis’ I Am show provides Wooster with around 65 inputs from the stage. “It’s a full-on set-up,” he said. “The drummer alone has two mics on the bass drum, three snares – each with at least two mics on, four toms, all the cymbals, electronic kick and snare… So he was up to about 20-odd channels on his own!”

According to Wooster, the show absolutely benefitted from the L500’s exceptional signal path – from the SuperAnalogueTMmic inputs, through the flexible channel path, and comprehensive internal FX Rack:”What really separates the L500 from the competition is the sound.”

“The effect on Leona’s vocal was very noticeable in the system,” he continued. “I think the 96kHz operation makes a difference, but the pre-amps make a huge difference as well, and whatever it is SSL has done on the EQ is stunning…. You really hear the HF.

“With Leona I have to deal with a massive dynamic range within every song… The mix has to be able to go right down to almost nothing and then build to everything. The way the SSL input section handles that is fantastic.

“Of course, it’s natural that when she whispers I get a load of low end from the microphone that I don’t need, and when she’s screaming down it there’s too much high end and not enough lows. I use a dynamic EQ from the internal FX rack to sort that out. The standard EQ helps calm down some resonances, though there were only two cuts with low and high pass filters that I needed to make with that.

“The channel compressor is the first layer of dynamics control, just to help take out any real big peaks; then across her stem – which includes her reverb and delay returns, as well the main vocal path – I put an SSL Bus Compressor; it’s very good!”

Wooster’s approach to the console surface configuration takes full advantage of the L500’s Layer & Bank approach to layout, as well as the expedient Super-Query (‘Q’) function – a forward and reverse interrogation feature with fast-assignment feature.

“I have all my input channels as a sub-layer,” said Wooster. “That’s where all the programming is. Then I use Stems on the top layer. I completely isolate them from any recall and end up with kick, snare, hat, toms, overheads, a bass channel, guitar channel, keyboard channel, lead vocal and BV stem faders that are always below my fingers… That’s my mix.

“All the automation and scene recalls are still going on underneath, so if I then hit the Q button on any Stem all of the underlying contributions pop up from below. I can make a quick adjustment in that scene, save it, then go straight back to the Stem layer and carry on mixing.”

As well as the console, the tour rig included the innovative K-array Firenze Slim-Array PA system with acoustic steering. Wooster was convinced that the combination of the two was unbeatable: “In the 33 years I’ve been doing this,” he says, “I’ve never mixed on a system this good…”